Exploring A Museum: The Tales of the Art-Loving Photographer 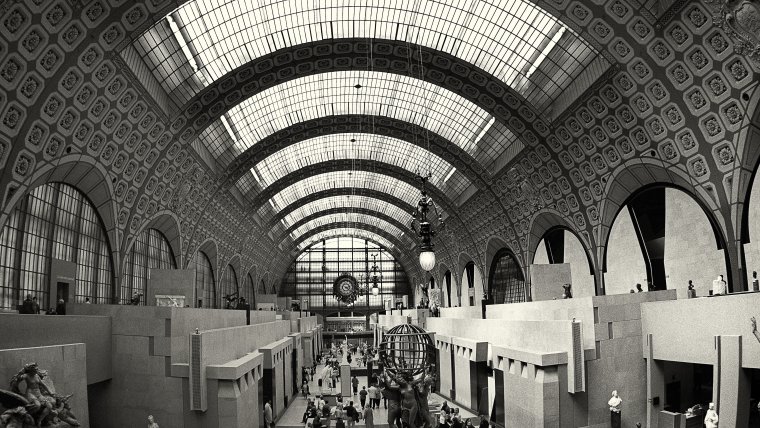 Exploring A Museum: The Tales of the Art-Loving Photographer www.sleeklens.com

I go to museums not just for the art and artifacts, but for the photographic possibilities. In fact, truth be told, I would be bored by some of the world’s museums if it weren’t for a camera in my hand. I recently visited the Vatican Museum and its over-the-top collection of religious-themed paintings and pope-abilia pretty much left me numb, but I gleefully went about the halls with my Canon 5DMIII and 24-70mm lens recording everything but the exhibitions. A great way to spend the morning.

There’s an amazing variety of people strolling museums. You have those geeking out over the displays while others are a little less committed—usually companions of the first category. They’re all fascinating to watch and if the moment is a right photograph.It’s easy to do this stealthily so you get unselfconscious poses (see my post for more about shooting from the hip). After all, you’re in a museum and even if a camera is pointed towards someone, they assume you’re actually photographing the collections. It may sound silly, but I have a whole portfolio of people taking pictures of paintings. For some reason, it seems odd to me how some will blow through a room, pausing only long enough to stretch out their arms, peer through an LCD and record the artwork. Oh, sure, if you want to look at it in terms of efficiency, they’re maximizing the time and they can view the art at a more leisurely pace at home. But there’s something about sticking your nose up against a Van Gogh and examining the brush strokes that makes seeing the original so special.

Getting back to image making, I set my shutter to the quietest setting Canon’s engineers were able to manage on a DSLR and juice the ISO to whatever is tolerable in terms of noise. Usually, anything from 1600 to 3200 will do the trick so I get a decent balance of hand-holdable shutter speeds and not too much noise. The color temperature of the lighting is anything but consistent in these places, so I wing it with a manual, tungsten setting and figure I’ll have to adjust the color later in Lightroom.

Then again, forget the exhibitions and the people. Many museums are amazing structures and deserve to be photographically appreciated. That goes for the outside as well as on the inside. For example, the D’Orsay in Paris (the opening photograph) is a converted train station and a wonderful subject for interiors. A few museums have amazing, sometimes ornate, stairways that are worth seeking out.Some museums exhibit outdoor sculptures. Sometimes the building itself is a sculpture disguised as a museum. In either case, you have the opportunity for playing with the curves and lines, often in abstract compositions.

There are also water fountains and some courtyards. Depending on the time of day, sunlight streams through in beautiful, playful ways. Shadows interplay with that light as well as the structure itself. You could spend all day just photographing a museum’s grounds and never step inside.

Okay, I hope I’ve disabused any notion you might have that museum can be stuffy places, but just the same, those who run them can be rather protective of their spaces. That means, of course, there are usually rules as to what you can and cannot do with a camera. Rarely, a museum will restrict photography altogether, but make sure you know what they do allow.

Often, where the collection involves older, fragile artwork, flash isn’t allowed to prevent the bright pops from fading the work over time (I wonder if anyone has actually tested this to see if it’s scientifically provable). No matter. These days just pump up the ISO if you’re truly interested in photographing the displays. A little noise in the picture is better than no picture at all.

Perhaps the larger issue, don’t bother bringing a tripod. I haven’t been to a museum yet that allowed them and it’s just bad form to spread the tripod legs out in a crowd of people. True, a monopod won’t cause the same hazards as a tripod, but they look a little dangerous nonetheless and I suspect you’ll have a guard swooping in on you with finger wagging. If I need a little extra support, I’ll brace the camera against a doorway or there might be some piece of furniture that works. Or, as I said before, I’ll just raise the ISO.

Lastly, I suggest bringing nothing more than a camera body with one lens, my favorite being a 24-70mm. The museum may have a rule against you carrying a large bag with you—you’ll have to check it at the door—and besides it’s much easier to operate in a confined space if all you’re lugging is a single camera.

Whether traveling or just bopping about your hometown, I highly recommend checking out a museum or two. You might get a little education, which isn’t such a bad thing, plus you’ll likely come away with some fun, or even great, images.