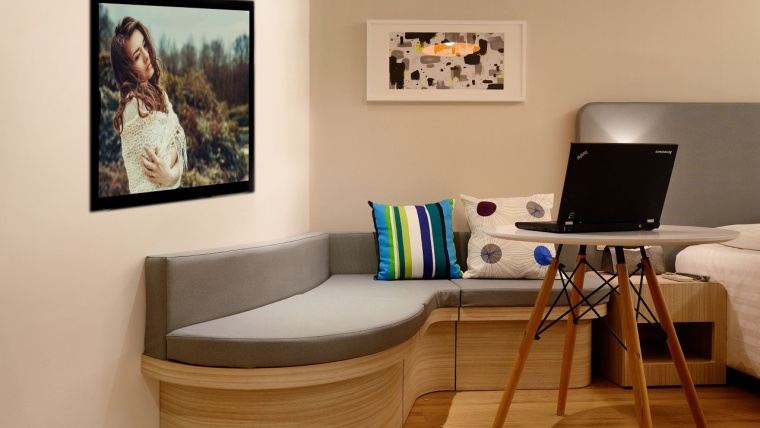 Today we’re going to have a look at using the Vanishing Point Filter in Photoshop. To be honest, this was pretty new to me until about a year ago when I started to use it constantly. I was aware of it, but not to the point were I would have actually used it and I’m sure many of you have over looked it yourselves, or may not even know it exists at all.

What it does is it allows you to add things like pictures and graffiti to walls using the correct perspective. What I normally do is transform it by using the Transform Tool and kind of judge it by eye, but this creates a lot of back and forth, trying to judge it correctly. So, wouldn’t it be nice to just use this tool and be done with it.

The answer is yes, so lets check out how.

So this can come in handy for… well for anything, but I personally put it to good use when I was doing mock ups in freelance jobs for people making renovations to their homes, it was great for adding pictures and furniture and having everything be in perfectly in perspective with one another. 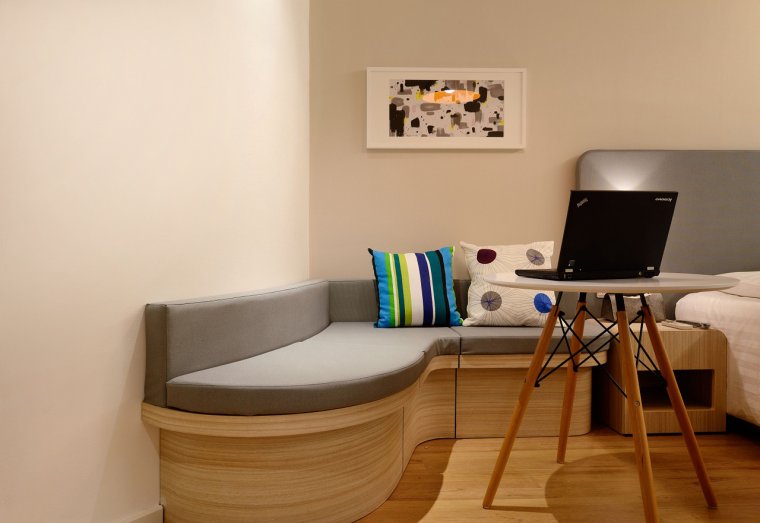 Copy and paste your picture on to the image and use the transform tool (T) to scale your image to the size that you want it to be on the wall if you were looking at it front on, hold Alt while doing this to restrain the image, judge it based on the wall it will be attached to. 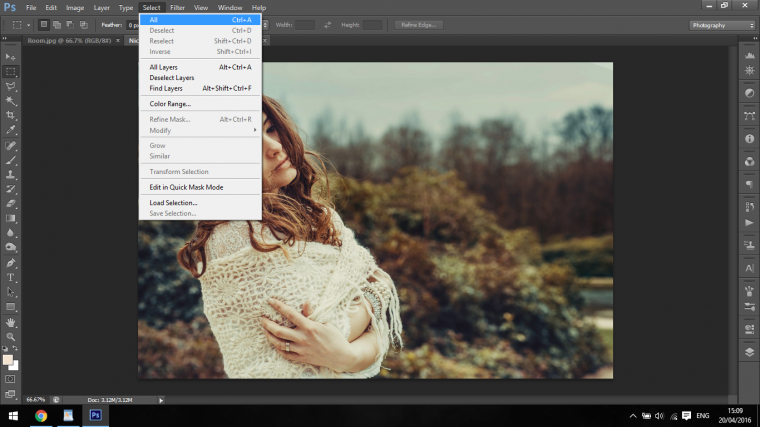 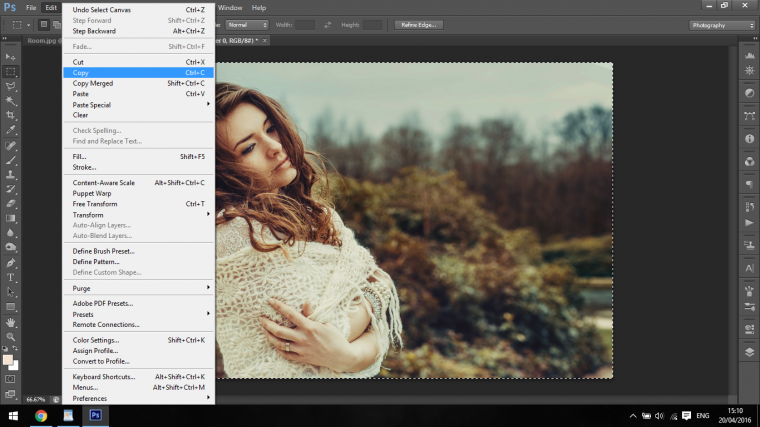 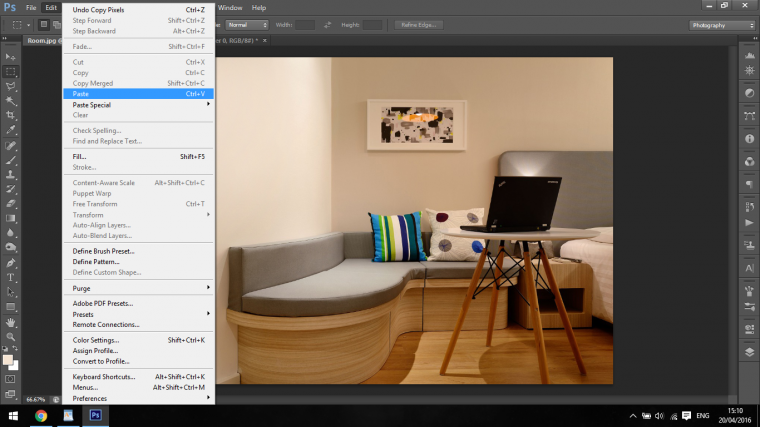 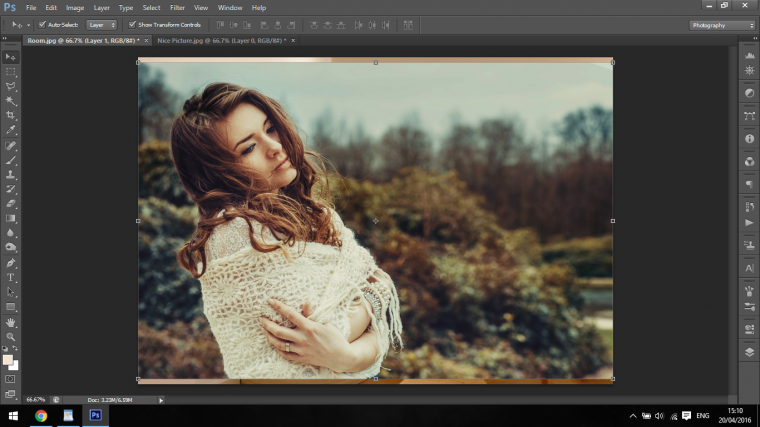 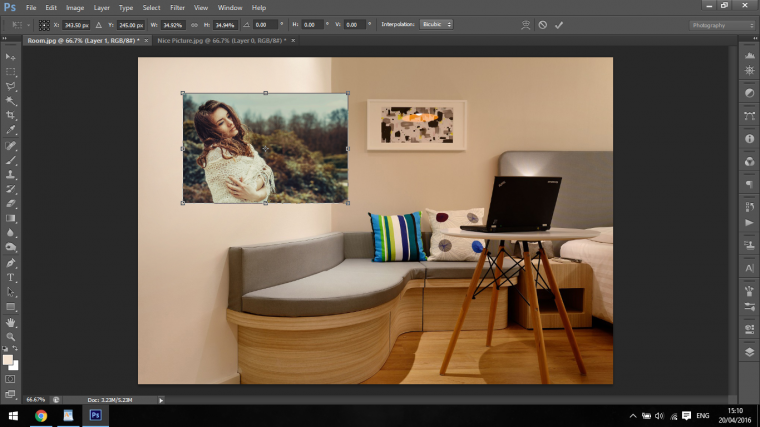 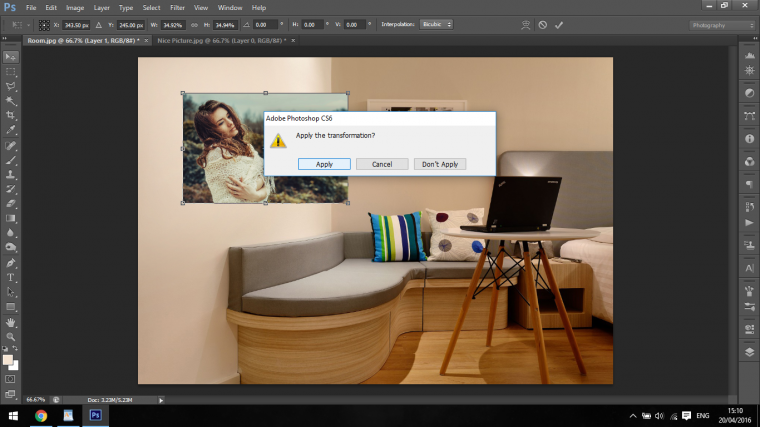 Just a quick lesson on perspective, if you look at the image below you will see the lines all go to what is called the vanishing point, so if you were doing things just using the Transform Tool you would have to guess all the correct lines in your head unless you were to use guides, that would take forever (Kinda) so now you know what perspective is lets move along.

Now Select all and copy the picture, you will need this shortly.

Then make that layer invisible but clicking on the eye beside it in the layer panel. 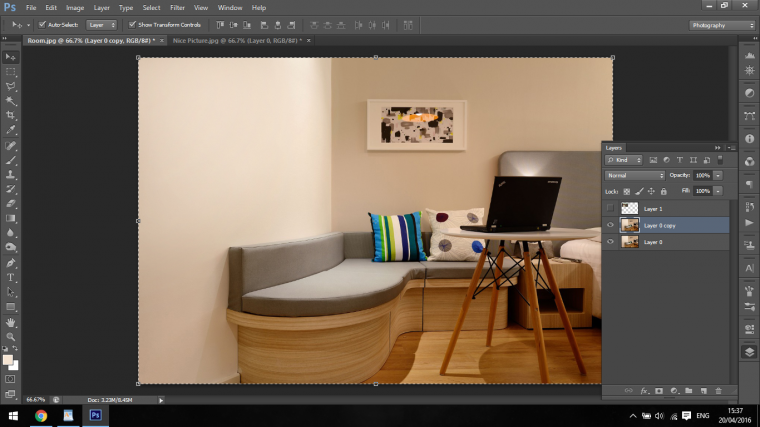 Now make a duplicate of your main layer and go to Filter – Vanishing Point. 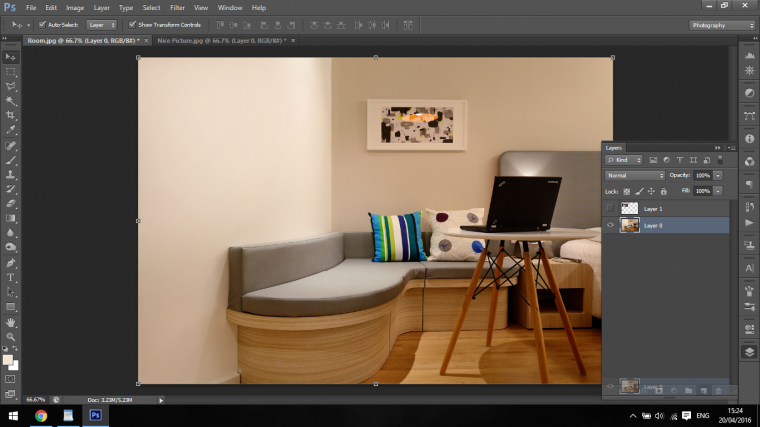 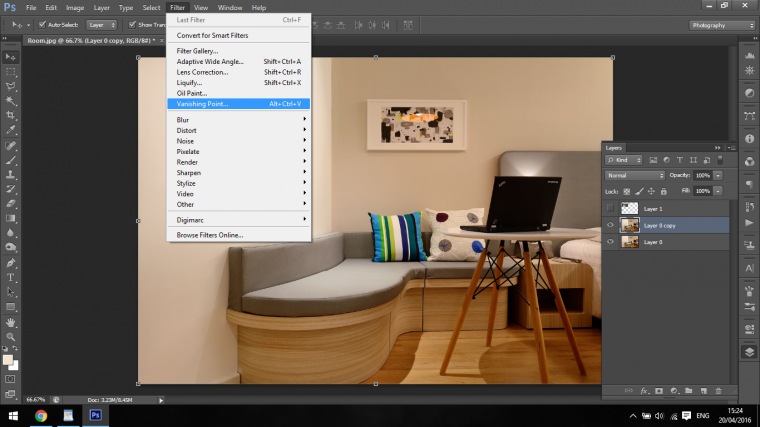 Now you will have to click on the Create Plane Tool (Shortcut C), this will define your perspective. So with a bit of imagination figure out where you think the corners would be on your image and click the four points. 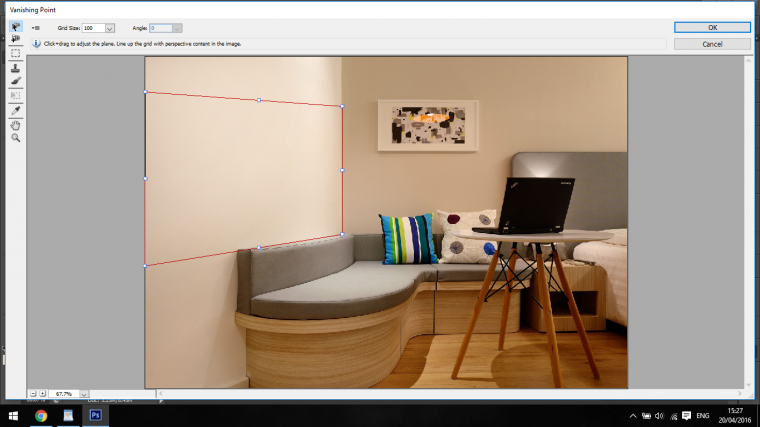 If you can see all the corners of the room then your job will be easy enough, of course I’ve made things slightly harder for myself but whatever, I can kind of guess so it shouldn’t look too bad.

You will also be able to move it around after if it shows up as red, what you want is for the Blue Grid to appear then you will know you’re pretty much on the money. 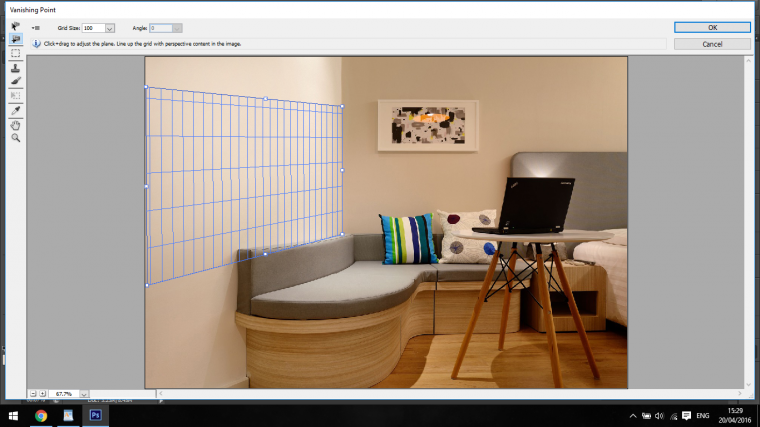 You can move the grid in or out, move all the sides etc by clicking and dragging, simple.

That way you can fix up as you go along.

There is a few other options with this like you can change your grid size like shown below, but it’s nothing major, maybe you can find a use for it. 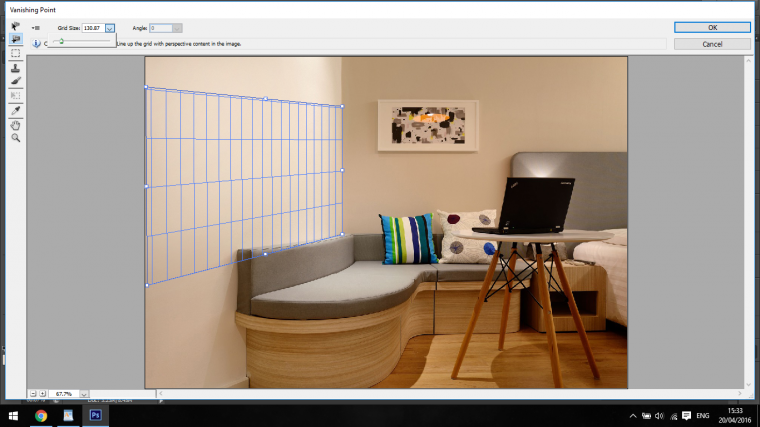 Once you’re happy it Ctrl V to paste the image we selected and copied early remember. 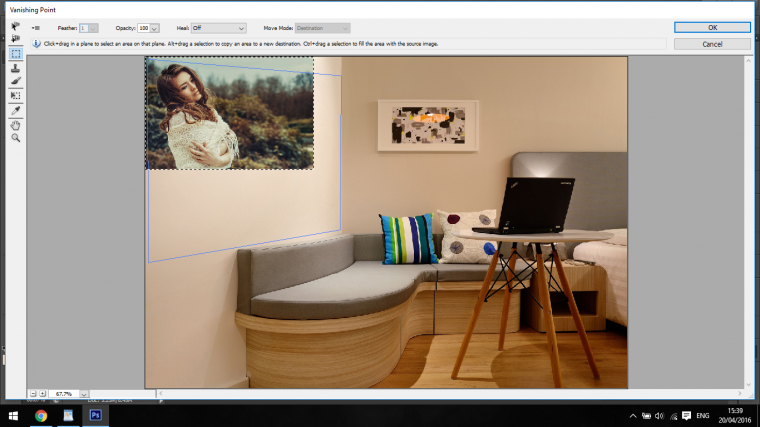 Now hitting M will activate your Marque Tool and you will be able to click and drag your picture onto the perspective grid.

This is were the magic happens. 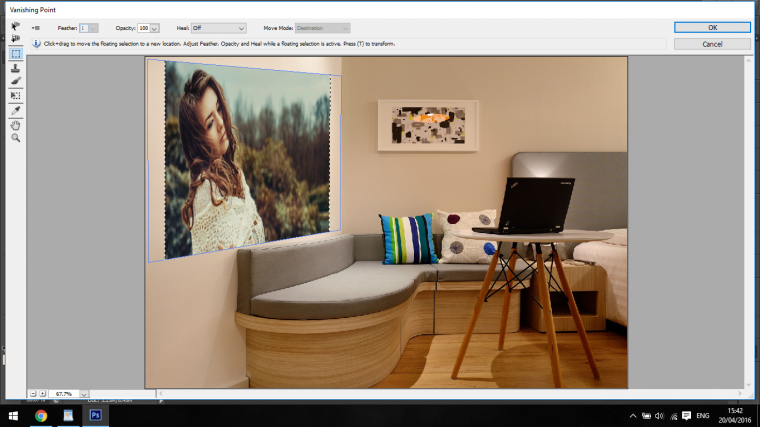 So as you can see from mine it is a little off, but what you ca do here is hit T for Transform and you will be able to work with the image inside the grid to better fit it with out losing it’s perspective. 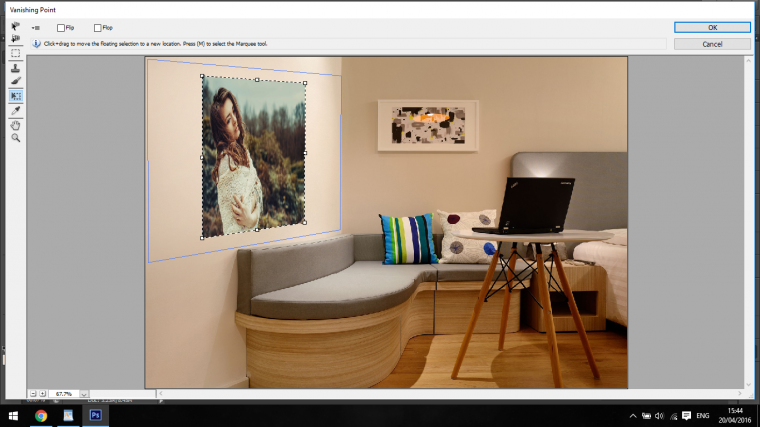 Next hit ok and it will apply it direct onto your wall.

If you’re like me you might want to add a frame onto your picture and give it a little bit of shading as well so that’s another little addition for you for real world application.

Until next time, keep learning. 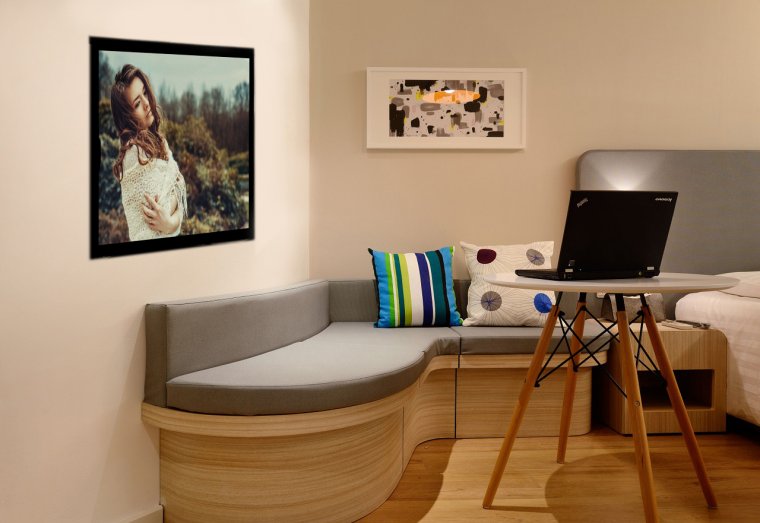 What is the Vanishing Point in art?

The vanishing point is an interesting concept that applies to both art and photography. By definition, the vanishing point is the point on the horizon where parallel lines seem to converge and create an impression of depth. You may also hear the term "convergence point" used, but it means essentially the same thing: a place on the horizon line in a painting or drawing where parallel lines seem to come together.

A work of art can have more than one vanishing point, depending on the artist's vision. Artists can select a vanishing point and compose the picture along diagonal lines that appear to vanish at the chosen point.

To visualize a vanishing point, imagine you are looking at train tracks that disappear over the horizon in the distance. At the place where they disappear, it will look like the two rails of the track come together. That's the vanishing point.

Want to learn more? A basic art class often covers the concept of vanishing point and you can seek out online photography courses as well.

What is the Vanishing Point fFilter in Photoshop?

It's no surprise that the vanishing point concept made its way into the world of photo editing--and into the industry-leading software tool, Photoshop. While Vanishing Point Photoshop tools are still available in older versions of the software, newer releases may not contain the Vanishing Point filter. If you're using newer versions of Adobe Photoshop or other Adobe tools, you should learn about Substance 3D features.

What does the Vanishing Point Photoshop feature do in prior versions? It makes it easy to achieve the correct perspective in images containing perspective planes, such as buildings, floors, walls, and other rectangular objects. The Vanishing Point tool allows you to specify or create planes in an image and apply various edits to enhance your photo.

You can get started using this asset by opening the Vanishing Point filter and using the Create Plan Tool to define a perspective plane. If Photoshop accepts the plane you've created, you'll see a blue grid that you can adjust to define the shape more precisely. You'll be making edits inside of that grid--and all the changes you make will be put into the perspective grid you've defined. Also, you can create multiple planes that may or may not be connected and save and delete planes as needed during the editing process.

By specifying the plane, you ensure that all edits are oriented to the proper perspective. That way, you can retain the look of your original image and make necessary adjustments. All of the tools in the Vanishing Point dialog box operate the same way as they do in the standard Photoshop menu. That means you can use familiar assets—such as the Marquee Tool, Stamp Tool, Transform Tool, and others—without any learning curve.

Even though the Photoshop Vanishing Point feature is not in the newest version, you can still seek out Photoshop tutorials that can help you understand how to use it. There isn't a vanishing point feature in Adobe Lightroom, but building your knowledge and skills with Lightroom tutorials is always a good idea.

What are the three types of Vanishing Point perspectives?

There are three types of vanishing point perspectives to know:

Three-point perspective. This perspective approach is applicable in compositions which are looking down from a high vantage point or up at a large object, such as a building. This approach has three vanishing points: depth, width, and height.

Is the Vanishing Point filter available in the latest versions of Photoshop?

Adobe announced in 2021 that it was removing its 3D features, including the Vanishing Point filter, in forthcoming updates. Not to worry: The company recognized that many of its users work with 3D so didn't remove 3D features entirely. Instead of creating a new Photoshop filter, Adobe launched a new Substance 3D collection to offer new and improved 3D tools. The Substance 3D collection is a suite of apps that are available across multiple Adobe software assets.

What is Adobe Substance 3D?

These tool options help you create top-quality 3D designs that make an impact.

What is Auto Focus (And How to Use it)

How to Create a Clipping Mask in Photoshop
Most recent

What is Lifestyle Photography?

How to Create a Clipping Mask in Photoshop

How to Take Engagement Photos