Photographing Churches: a Journey around Catalonia 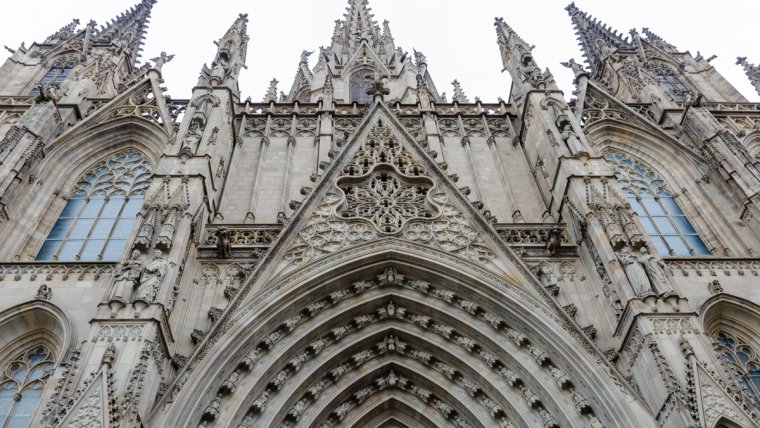 If you like to take photos of churches, Catalonia is the right place to visit. You can find churches of many styles: Gothic, Romanesque, Modernism…  There is at least one church in each village. And in big cities like in Barcelona, you can find lots of them, including cathedrals. It is impossible to share in just one article all of them, but, as a local, I would like to share with you my favorite ones, including some that are not mentioned so much in touristic guides.

The Sagrada Familia is one of the most famous churches in Barcelona and the world, and not without reason. Designed by the modernist architect Antoni Gaudi, the church is planned to have eighteen towers when completed. The tallest, that has not been built yet,  will be 172.5 meters high.

Height and space play a major role in the construction of the Sagrada Familia. Gaudi envisioned a building that would inspire the worshipers and impact the skyline of the city, but not attempt to supersede god (the greatest architect according to Gaudi). Thus reaching 172.5 meters, the Sagrada Familia will be one of the tallest religious buildings in the world, but a few meters short of the nearby hill called Montjuic. The church also has three monumental facades, the oldest built by Gaudi himself and depicts the birth of Jesus. Each of the facades depicts crucial events in the life of Jesus. Another factor that plays a major role in the construction is light. In order to let light in and to lessen the load of the roof, skylights have been placed in between the columns and the walls of the apse are rich with colorful stained glass windows.

In order to enter the church these days, you will need to buy tickets (on-site or prepurchase online). The addmition fee is meant to help and finance the cunstruction of the church.

Tip: Buy your ticket online because it is much easier than getting it on the spot, and the waiting line for entering is shorter. You will need to decide at what time you want to go. I highly recommend you to go in the early hours to avoid the crowds. There is the option to access one of the towers. It is a bit more expensive, but totally worth it.  The towers of the Nativity side are the ones that will grant you a closer view to Gaudi’s work. The other towers have also beautiful views, but I personally prefer this one.

– Cathedral of the Holy Cross and Saint Eulalia (Barcelona)

The gothic Cathedral of the Holy Cross and Saint Eulalia was built from the 13th to the 15th century. It is known simply as “The Cathedral” of Barcelona and is dedicated to the saint of Barcelona. Saint Eulalia (209-February 303), was a thirteen year old christian who lived in Barcelona at the times of christian persecution by the Roman Empire. Eulalia went to the roman governor of Barcelona to request for the cessation of the persecutions. The governor, however, wanted her to renounce her christian belifes, and after her refusal he subjected her to thirteen turtures, crusifiction and decapitation. According to legend, Eulalia went up to heaven in the form of a dove which came out of her mouth after her execution.

A side view of the Cathedral, well known you should take a moment before going inside and appreciate the little details outside

The Cathedral is quite dark, so I recommend you to take your tripod because long exposure photography might help you to take nice photos inside.

As it is a well-known place, get ready to be surrounded by a lot of people. If you go early in the morning, it can be a bit emptier, but it is difficult to be alone. The Main Entrance (In Pla de la Seu Square) is the busiest one.

It is good to know that there are two side entrances: Sant Ivo’s entrance (in Compte Street) and Santa Eulalia (in Bisbe Street, this one is also adapted to people with reduced mobility). The Santa Eulalia entrance is my favorite because it is less busy and takes you to the cloisters that are quite photogenic too. You can visit the Cathedral and its cloister for free almost all day. The only time you need to pay is from 13h to 17h30. The advantage of paying is that you will enjoy of an emptier Cathedral because almost everybody tries to go in when it is free. This is something to consider if you don’t want a lot of people in your photos. To visit the Cathedral you need to follow a dress code; your shoulders and knees must be covered (T-shirts and jerseys are fine, but no tank tops).

Tip: If you come to Barcelona, you should make the effort and visit both the Cathedral and the Sagrada Familia because the two are so different from each other. They will offer you a great contrast in your Barcelona photography collection.

– Church of the Sacred Heart of Jesus (Barcelona)

The Church of The Sacred Heart of Jesus is located at the top of the Tibidabo Mountain near a small amusement park and a nature reserve. Visiting this Church is interesting not just for the Church itself, but also for the wonderful views of Barcelona.

They have a nice website where you can have a look at some 360° photospheres that will help you to decide if you want to pay a visit or not. You can visit the temple and go up with an elevator. You should check the opening hours before coming because they change depending on the season.

Tip: if you have time and you like taking photos of transportation, or if you want to get to the site in a unique way, I recommend you to take tourist transportation. You need to get to the Av. Tibidabo stop of the Ferrocarril. Once there take the Blue Tramway, that dates back to the 1901 and it will make you feel like you are in a different era.

Finally, you will need to take the Tibidabo Funicular Railway, that is also operating since 1901. This trip takes some time, but it gives you the chance to take some nice and not so common photos of public transportation. If you want to go down the Mountain faster, you can take the T2A bus, that will take you directly to Barcelona City Center.

– Other churches in Barcelona

Santa Maria del Pi  is a Catlunian gothic church. Unlike other gothic styles, which are extravagant on the outside, the Catalunian gothic style is more modest, it has less spyres and towers, the buildings in this style seems more humble but massive, giving the feeling of down to earth sturdiness as if saying “I’m here to stay!”. This of course is only on the outside, on the inside the churches are rich with decortions, frescos, and stained glass windows. One of the most remarkable features in the church of Santa Maria del Pi is its beautiful rose window, one of the largest in Europe.

Santa Maria del Mar got really famous because of a book called “The Cathedral of the Sea”, written by Ildefonso Falcones. When built, the church was not patroned by any wealthy man or organisation, the patrons of the church were in fact the residents of the poor neighborhoods near by. Many of the patrons of course could not afford to pay with money for the construction, so instead they paid with labor, actually taking part in the building of the church. It is also a Gothic church. If you take the guided tour, you will be able to access the rooftop and take some photos of the city.  However, be patient because this church is usually full of both tourists and local visitors.

If you are in the mood to explore the less famous places, you should visit Marcús Chapel. This little Romanesque chapel is in fact one of the oldest in Barcelona. It was built in the 12th century on the outskirts of the old city. The city expanded since then, and now it is a bit hidden between buildings. It is located in the Street Carders, corner with Marcús Square.

This is a little Romanesque church located between the buildings of a workers neighborhood called Bellvitge (in the street Ermita de Bellvitge, to be exact). You can get there easily from Barcelona by Metro (Line 1, Feixa Llarga stop) The earliest documents that mention the church are from the 13th century. Due to repeating floods and even an incident of looting, the church needed to be renovated several times and even to be rebuilt.

In the same city as the Ermita de Bellvitge, you can visit a much newer Church. It is in the Ajuntament Street. The easiest way to get to this church is by Metro (Line 1, Avinguda Carrilet stop). This church was finished in 1947 and it has a classic and Romanesque revival style.

Tip: You can visit a nice street close to the church. It is the Xipreret street and it is one of the most famous streets in the city. It has 100 meters long. The street already existed in the Roman times and it is considered to be the origin of the actual city.  The buildings you can see now in this street were built between the 13th and the 19th century.

Ripoll is a city close to the Pyrenees Mountains. In this beautiful town you will find the Monastery of Santa Maria de Ripoll, a Romanesque jewel and important place for catalan culture.

If you go to the information desk next to the Monastery, they will offer you a tablet that contains tons of information about the History of the place. Some of the most photogenic spots are the cloister and the portal, that is full of figures representing religious scenes.

– The Sanctuary of the Virgin of Nuria

If you like nature photography too, you should visit the Sanctuary of the Virgin of Nuria. It is located in the Nuria vally which is 2000 meters above sea level and bordered between the peaks of the Pyrenees mountain. You can get there either by the Rack Railway or hiking from Queralbs or la Farga, that are the closest villages.

Tips: Once in Nuria, don’t forget visiting the Hermitage of Saint Gil. Saint Gil was a missionary monk, he went to the mountains to help the viligers keep true to their faith. he also offered religious services and fed the poor. This hermitage was built in the 11th century in the place where some shepherds found some of Saint Gil’s belongings. Important:  if you go during the winter, check the weather first. It is quite cold and it can even snow.