Ah, fall is the season when I start thinking about the desert. Temperatures are beginning to cool and I can go to some of my favorite places without worrying I’ll get baked to a crisp in the typical 110-degree summer heat. Not only that, but the weather shifts to sometimes stormier conditions which are far more photogenic than the usual searing, clear skies.

So my opening advice is consider planning a winter trip to a desert near you.

My next advice is to put Death Valley National Park on the top of your list of desert locations. Don’t let the name fool you. I know it sounds like some notorious hellhole that only brave or demented people visit. Instead, the 3.4 million acre park has an overwhelming number of photo ops to choose from, most of them landscapes. Unfortunately, when you drive into the park for the first time, the place is so huge, it’s hard to pinpoint where those photo ops are.

That’s why you’ve got me! In this post, I’ll take you to a few of the best, image-rich locations that are easily accessible by paved road. In the next post, we’ll get away to the backcountry where things get really spectacular.

Located just east of Stovepipe Wells Village along Highway 190, the sand dunes are easy to access from either a parking lot or if you like, you can park on the road’s wide dirt shoulder and simply hike a short distance into the thick of them. (Do yourself a favor and as you leave your car, look behind you for landmarks so you can steer your way back.) The dunes shift in form throughout the year but there’s always one over-achieving pile that reaches higher than the rest and if you’re feeling energetic, you can head for that. Or, just wander around. Closer to the road, there are patches of dried, cracked earth that make for great foregrounds or abstracts. As for the dunes, the curving lines where one sandy ridge curls around into another are great for various compositions. In all directions, you’re surrounded by mountains which create great backgrounds, or there are multiple opportunities for abstracts by framing nothing but curves, shadows, and sand. I recommend taking several lenses. Use wide angles to accentuate the sensuous lines and telephotos to compress the landscapes into abstracts or to bring the background mountains into the shot. A tripod is a good idea, too, because you’ll probably want to use small apertures for more depth of field and that brings with it, of course, longer exposures which require more than a steady hand. 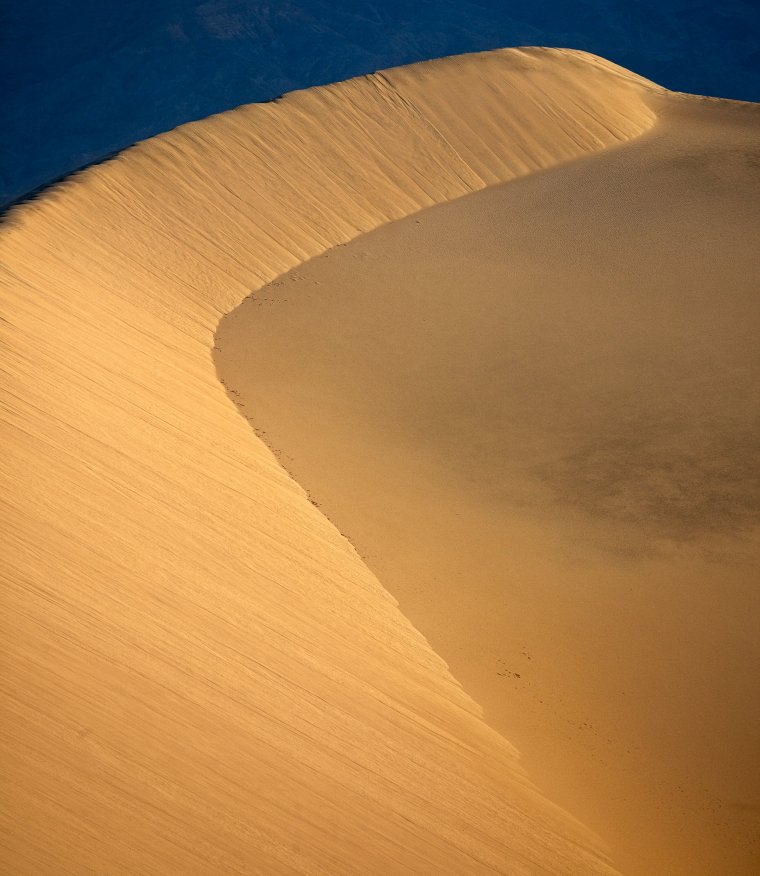 Shot with a telephoto lens to compress the scene into something slightly abstract.

The best time to arrive is about 30-45 minutes before dawn but there’s enough light wander out to a suitable location and wait for the sunrise to magically transform the dunes. Granted, for all the effort, this magic will only last a few minutes before the sun stops delineating the dunes’ shapes and it all becomes rather bland. Sunrise is another good time, but be careful because once it gets dark, it’s really dark and you might have a hard time finding your way back. Bring a flashlight or, better, a headlamp. Lastly, in the winter, the dunes are pretty popular and can be trampled with footprints, marring otherwise good photos, so you may have to hike about a bit to find an unspoiled shot.

This is just outside of Furnace Creek, again on Highway 190. There are a large parking lot and a short, somewhat steep paved path to a high point where you look down on a pretty tortured landscape of twisting canyons that lead out to Death Valley’s main playa and then in the distance the Panamint Mountains. The main attraction for most photographers’ memory cards is Manley Beacon, a pointy outcrop the shape of a shark’s tooth. In the right light—sunrise is best—Manley Beacon gets hit by a brief blast of warm sunlight while the rest of the foreground is still in shadow. Get here early, before sunrise, to get a spot on the overlook among a usual crowd of other photographers. If there are clouds, sunset can also provide great images. Again, bring a tripod and be prepared to bracket for the extremes in light.

For another spectacular view without so many tripods, Dantes View at an elevation of 5475′, gets you a plunging, straight-down shot of Death Valley’s below-sea-level playa running through the middle of the park with the Panamint Mountains shining in the background. The time it right for a sunrise with the moon setting at the same time near the Panamints’ 12,000′ Telescope Peak. The drive there will take about 45 minutes from Furnace Creek and involves a 14-mile climb up a winding road off Highway 190. So if you spend the night at one of the hotel rooms in Furnace Creek, you’ll need to get up horribly early to reach the viewpoint before sunrise. Well worth it. One note of caution. It gets really windy on the top of Dantes View and in the winter, adds to that bone-rattling cold. Dress for the Arctic and you’ll be fine. There’s also a trail that leads off from the right side of the parking lot to more great views of both Death Valley and to the east into Nevada. You’ll need a tripod just to hold your camera steady in the howling wind.

On the opposite side of the park, way north of Dantes View (about 80 miles away, which says something about how big Death Valley is), you’ll find the one manmade attraction inside the park that should be photographed. I won’t get into the entire history of this colossal home built in the middle of nowhere by a wealthy man who wasn’t, by the way, named Scotty, but the architecture alone is worth an hour of your time. There’s a tour of the grounds and buildings, but photography inside the house is prohibited. However, if you get there early in the morning, you can wander about the grounds unfettered and have wonderful shadows and light, and no people.

Sadly, flood damage to the surrounding roads has meant Scotty’s Castle is currently closed and perhaps won’t be reopened until 2019, but keep it in the back of your mind because it is well worth a visit.

That’s pronounced U-be-hee-bee. Just so you know. This is around the corner from Scotty’s Castle and is available for photography. Best in the morning or evening. The volcanic crater, some 600 feet deep, was formed a mere 300 years ago when rising magma hit ground water and the resulting trapped steam exploded. There is a soft, steep trail to the bottom of the crater but photographically, not really worth the difficult climb back out. Besides setting up near the parking lot for sunrise shots, try wandering around the crater rim for other angles, especially in the late afternoon. Consider doing panoramas here to get it all in.

There is something entirely weird about driving along Highway 178, south of Furnace Creek, and seeing a sign saying “Sea Level,” while you continue descending. That descent ends at Badwater, the lowest elevation in North America at minus 282 feet. The best light here is either sunrise or sunset. You can take a path from the parking lot out into the playa, which, during the winter, is often a shallow lake, making for nice photos. If you luck out, you’ll get the Panamint Mountains reflecting in the water. A rare sight.

For more information, go to the Death Valley National Park website, Keep in mind, that winter is a popular time and you’ll have to book the few in-park hotel rooms several months in advance. You can also camp at several, somewhat dreary campgrounds but they don’t take reservations. If you don’t mind a half-hour drive out of the park, try getting a hotel in Beatty, Nevada. It’s at least cheaper but farther from the good stuff.

[The opening image was shot from Zabriskie Point looking down into the canyons during a winter sunset.]