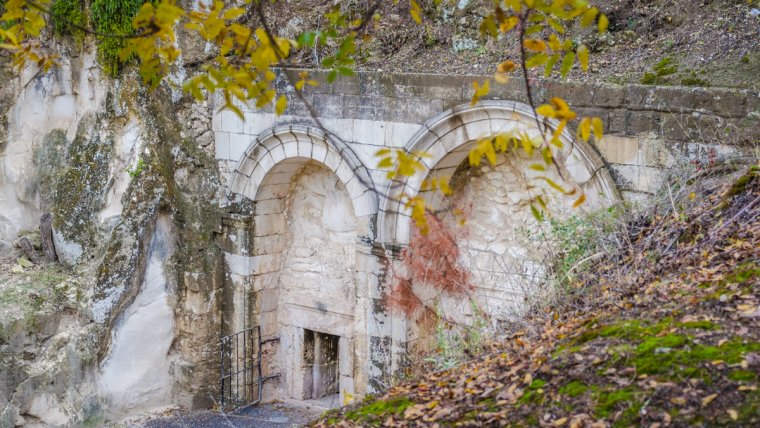 Although I am originally from Barcelona, I have been living in Israel for almost 5 years. In this time I had the chance to visit a lot of places. Some of them are well known all over the world such as Jerusalem, the Sea of Galilee or the Jordan River. One place you might not have heard of is Beit She’arim National Park. It is located in the town of Kyriat Tivon (Lower Galilee) and it has been recently recognized by UNESCO as a World Heritage Site.

This National Park is an interesting site for photographers because you can take a quite diverse collection of photos. The remains of the city and the underground Jewish Necropolis are located in a hill surrounded by the beautiful Jezreel Valley, so you can combine your images of the old city with landscape and nature photography.

A bit of Beit She’an History

Beit She’arim was a Jewish city of great importance in ancient times. The settlement in the area started around the 9th century BC and lasted until the 6th century CE. In the 2nd century CE the city reached its glory days when Rabbi Yehuda HaNassi made it his seat and brought with him the Sanhedrin (the highest Jewish judicial and ecclesiastical council in the Land of Israel). The city was destroyed during a revolt against the Roman Empire in the 4th century CE and although it was rebuild, it never regained its glory and was abandoned and forgotten a few centuries later.

The most outstanding remains from the ancient city is its necropolis. After the burial of Rabbi Yehuda HaNassi in Bet She’arim many Jews from the Land of Israel and from the Diaspora made arrangements to be buried in there as well. More than 30 burial caves were excavated. The entrances to the caves are stone facades in classical designs with impressive stone doors which pivot on hinges. The doors lead to subterranean halls and burial chambers hewn in the bedrock and containing burial shelves and sarcophagi. Found on the walls and coffins, are decorations and inscriptions in many ancient languages, providing information about those buried in the graves.

You can access the Park by car (about 20 minutes east from Haifa) or by bus. However the main buses don’t reach so close to the Park.  The average time a visit to the Necropolis takes is estimated in something around 2 hours (for non-photographer visitors). The Park has opening hours that you can check in the website of the Israel Nature and Parks Authority. For planning your visit it is important that you know that one part of the Necropolis can be visited just on weekends and only if you register in advance.

The Necropolis is underground, meaning that you will go into several caves in which you will be able to see graves, coffins and wall decorations and inscription. It is a dark environment, so I recommend you to bring a tripod in order to take nice photos (long exposure photography) and a flashlight. Outdoors, there are places with some shadows, but in general there are not a lot of trees.  If you want to visit the place in spring-summer, take precautions for not getting dehydrated or suffer a sun stroke. A hat or something to cover your head might be helpful. Don’t forget your water, especially if you also want to walk in the surrounding valley. Once you leave the Necropolis, there are no spots to fill your water bottle.

When you are taking photos in the Necropolis you will need to change the settings of your camera quite a lot because you will move between the dark caves to the bright outdoors. You might need to use high ISO values inside the caves. Make sure you put your ISO down when you are outside if you don’t want to end up having unnecessary noisy photos. A good option can be to use the AUTO ISO option if your camera allows it.

The caves entries are great subjects to photograph. Some doors have interesting decorations so have a look before you go in.

You can get even closer to the details.

Inside the caves you might need to set a tripod in order to take sharp photos. In the darker spots it might be difficult for your camera to focus automatically. In these cases, you can use a flashlight to point to some spot inside your frame, focus on this light spot, turn off both the flash light and the auto focus of your camera and shoot. If you need to re-frame, you will need to turn on the auto focus of your camera and repeat all the process. You can also try to focus manually.

The coffins are adorned with decorations as well as the walls, both coffins and walls might be interesting subjects for your images.

Other coffins have flower decorations.

One of the most important decorations found is a Menorah (a seven branched candelabrum) carved in stone; this is one of the oldest depictions of the Menorah that was used in the Jewish Temple, one of the holiest Jewish relics.

Next to the Necropolis you can find some ruins of the Ancient City such us the Dwelling Houses and one of the Gates. If you like taking photos from viewpoints, I recommend you to go up the little Hill where the city was originally located. On the top there is a photogenic statue of Alexander Zaid (1886-1938), a frontiersman and guard of the area.

From the top you have views to the Jezreel Valley and the Mount Carmel. It is also good spot for panoramas.

Jezreel Valley is the biggest Valley in Israel and in the area surrounding Beit Shea’rim there are several trails. I was living right next to the Valley and I loved walking around taking photos. A lot of the photos I use to illustrate my articles were taken in this place. The landscape is mostly agricultural and it change seasonally. In the winter and spring it is quite green, in summer it becomes golden and in autumn the main colors are browns.

This photo is from the end of summer and it looks totally different than in winter.

The morning can be a bit  foggy during the winter. The golden hour of the sunset is a great time to take photos in the Valley.

I loved taking portraits in the Valley during the Golden hour. Here my dear friends Rotem and Guy.

I hope you liked Beit Shea’rim. It is a place that I carry deep in my heart because it is where I was going to run, relax and of course, take photos. Feel free to contact me with any question about this Park or if you need more information.  Have a happy shooting!!!