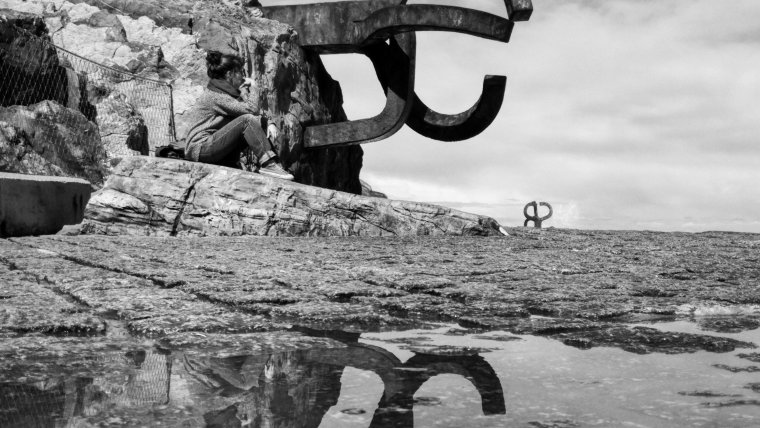 Dear reader, thank you again for dedicating part of your time to the exciting world of mobile photography and sharing this adventure of discovering everything a phone can bring to the profession of telling stories with light.

As we had mentioned in the last articles, we traveled to San Sebastian, a beautiful place in the north of Spain, well known for its gastronomy and the beauty of its landscapes. In these early summer times, we believed that we would find a sunny city with beaches full of people and an ideal light environment for our mobile camera tests.

However, the experience was somewhat different than we expected but equally productive. After arriving at the place, beyond good weather and sunny days we found cold and lots of rain, I think we hastened to think that the North had already begun the summer. This was an interesting challenge for the LG G5, its use in rainy and wet conditions allowed us to corroborate that, from the outset, it is a rugged phone. Even to the point of supporting a coastal rain directly, without presenting any problem later.

It even withstands the humidity of the interior of some steam baths of the spa of La Perla, making photographs and videos, without presenting any problems of operation. As you can see, in terms of adverse conditions, the phone responded satisfactorily to a very strong resistance test.

Despite the adverse weather that we are in, we decided to go out and continue searching for images. The few surfers we found on the beach served us as the first characters for the story that we would have there. Since surfers are not always very close to the beach, it was a good opportunity to test the different focal lengths of the camera and its operation. In the day, despite the difference in the quality of the cameras, both behaved very well and made photographs of considerable quality. As the afternoon fell, we began to notice an obvious difference and we used less and less the more angular chamber.

We also took the rain to make photographs of cloudy landscapes, again both cameras did well, although the most angular, having this fisheye effect, generated some quality losses with distance.

The next day, taking advantage of the few sunny times during the day, we returned to the beach in search of more people, but again our focus was on surfers and one person walking their dogs. This time we take the opportunity to evaluate the color management of the device. When shutting down in RAW, the camera gives us a file with a low saturation level and low contrast, which gave us a lot of freedom when editing. In the case of files in JPG format the colors were faithful and save very extreme conditions of light, we had no problem with the device.

After the results of the previous night in the streets of the city, we decided to visit the aquarium where we knew that we could find even more unfavorable conditions. Indeed, the low lights of the place, added to the permanent movement of the animals that live there, created a challenge. However, it is here that a 1.8 diaphragm shows all its potential and although we had to raise the ISO a little to work with reasonable shutter speeds, the results were good. Also, of course, the creative possibilities that we could give the movement at low speeds (not everything has to do with the camera)

The following morning, before the end of the trip, we went to visit the monuments of Peine del Viento, so portrayed by tourists. It was the first day that the sun shone, which is why the place was full of people making their photographs for the memory. These are the moments in which you have to give free rein to creativity, not wait for the monument to be alone, but to take advantage of people to frame and generate games of forms.

To find these spontaneous moments that appear as they disappear, it is important to have a fast device. This was the moment when we thanked the quick commands of the grip that we carry along with the phone. Not only because of the quick access to the camera, but also because of the ability to oscillate rapidly between focal lengths. In addition, the focus speed of this phone was another point that helped in the process.

Now that the trip is over, and more calmly, we can evaluate some elements that we might not have considered during the tour but which are really important:

Firstly, it is clear that the excess battery of 1200 mph is very useful, the camera taking pictures all day consumes approximately the load of 4000 mph, and at no time we had to use the external battery that we had loaded. This taking into account that we were taking photographs in a regular manner, gave us a very positive feeling.

On the other hand, the photographs that we initially visualize in the device in its version JPG, putting them in a mobile editor like RAW greatly improve their quality. This is good to clarify because some people when making the photographs see them on the phone and do not see much difference with other cameras. Surely when they edit their RAW they will realize what I mean.

Finally, to say that after trying many phones throughout this year is clearly the best device we have encountered. Why? It’s simple, it’s the first phone we really think is designed for photographers. Not only for its grip, which is already a breakthrough but for the distribution of its software in manual mode, which generates great autonomy when taking photographs.

As always, this has been our test ride. We hope to read your opinions and above all, it is you who can explore this type of devices and take out their own conclusions.