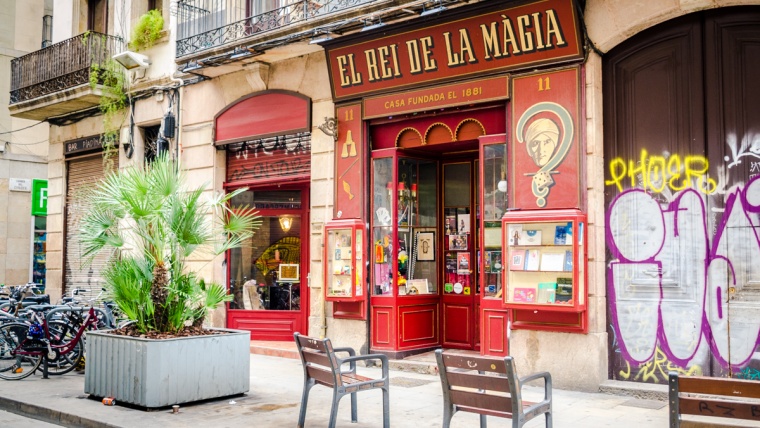 In previous articles about Barcelona, I took you to the parks and to visit the markets. Today I want to take you back in time. Wouldn’t you like to know how people lived 100 years ago in Barcelona? We can imagine how the city looked like by then by visiting the numerous historical stores scattered through the city. These stores were established in the 19th century and the beginning of the 20th. A lot of them have a modernist style and they have been kept until today looking almost the same as in the old days (thanks to the efforts of their owners). They are quite photogenic stores because of their architecture, historical interest and also because of the products you can find in them.

How to find historical stores in Barcelona

There is an association called “Establishments emblematic (Emblematic establishments)” whose objective is to preserve these beautiful stores.  A lot of them disappeared because of the economic crisis, so it is important to take care of the ones that are left. To find these centenary stores, you can check the new guide of establishments in order to organize your photographic route. If you prefer to take a guided tour, you can look into the ones offered by ConeixerBCN. You can also find them by walking around the city and looking for the plaque that Barcelona City Hall gave them to recognize their contribution to the city and that is placed right in the entry to the store (on the floor).

Some of the historical stores are pharmacies and they are just gorgeous. Their modernist look will be a delight to art lovers, they are full of details from the 19th century such as beautiful pharmacy flasks or the cash registers.

One of my favorite stores is the “Torrente Tecno Industrial” because of its originality, established in 1880. It sells lighting conductors (para llamps in Catalan).

In the list of emblematic establishments you will also find “El Rey de la Magia”, or in English “The King of Magic”.  It is the oldest magic store in Spain and one of the oldest in the world! They made a lot of efforts in keeping the store like it was in 1881, the year that it was established.

There is also a store of knives which is opened for business since 1911 (Ganiveteria Josep Roca) and a numismatic establishment from 1920 (Numismatica Calico).

These were just some examples. Now it is up to you to walk around Barcelona and discover more centenary stores!

Some tips for photographing historical stores

Here are some tips that will be useful for photographing historical stores in Barcelona.

Check the opening hours: Most of them close for lunch time (approximately between 14 pm and 17 pm). Keep this in mind especially if you want to take photos inside (or to buy something in them too).

Ask the owners if you can take photos: I would always ask the owner if I can take photos of his/her store. They are aware that their establishments are beautiful and photogenic, but they are also small, so they will see you coming in. It is considered quite rude to take photos and just leave without even talking with them.

Try to avoid glass reflections: If you want to take photos of the window display you might find useful to know how to avoid the reflections produced by the glass. One thing you can do is to get the lens as close as you can to the glass. Using a polarizer filter can reduce the reflections a lot too. Ah! And don’t use flash because this will make things worse (more light going into the glass means, even more, light reflecting back at you, and you don’t want that).

I hope you enjoy these particular stores in Barcelona. Feel free to contact me with any question about this matter or if you want more information.  Have a happy shooting!!!