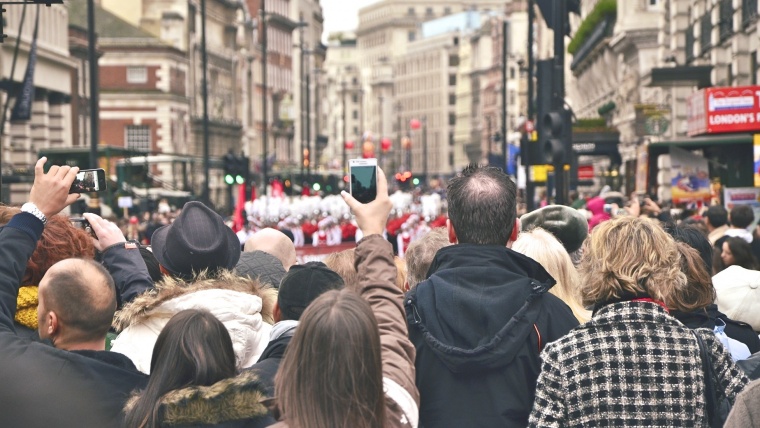 With most people having access to a camera phone these days, it seems like everyone has suddenly become a photographer. Antonio Olmos told The Guardian,

‘There have never been so many photographs taken, but photography is dying’.

A strong statement for sure, but is it really accurate?

The last gig I went to was a few years ago and I remember the majority of the audience filming and photographing the gig with their smartphones. Even though (and perhaps because) I’m a photographer, I was very conscious of wanting to watch the performers rather than peering through a lens or phone. I understand the mindset of wanting to capture some memories to look back on later, but if you spend the entire event doing that, did you really make any memories?

After a large event, the internet and media are saturated with pictures, both from the press and from the public. Newspapers these days can be far more keen to use snaps that have been taken by the public than to pay a photographer to license their image.

Professionals vs Public with Phones

One of the major things I’ve had to factor in as a working photographer is people getting in the way with their phones! This is when a camera phone can really impact your job. When I was shooting weddings or events, I had to build in a part for guests taking pictures too. In the past this would have been a small handful of people with a compact camera, today it’s almost everyone in the party, jostling for a phone snap. In my opinion, we can’t fight this and so part of my ‘direction’ would be to tell guests that I’d be setting up the bride and groom for a few pictures but then when I was done, they would remain while everyone else got a picture. To not do this meant trying to shoot while fighting elbows, trying not to get edges of phones in a shot and people shouting to get the couple to look at them.

Another concern is ruining the day for the person or people involved. If you’re getting married then chances are, you’d want to share pictures of your big day yourself, for friends and family who couldn’t be there. Imagine your disappointment if you logged on to Facebook the next day to find there were already tons of images posted and some weren’t so flattering.

A professional photographer’s job is to make you look the best you can; that’s why a client will never be presented with photographs where the subject has their eyes half closed or is pulling a strange face. That’s not something that can be guaranteed when a dozen camera phones are snapping away. In fact, many wedding photographers are now pleading with couples to have a technology free day; something I think we’re inevitably hurtling towards being the norm.

Many argue that the quality of a phone camera can never surpass the quality of a professional DSLR, but technology is forever changing and improving. We’re already at the stage where many journalists are now using iPhones to take pictures, record audio, and record video, so clearly they are good enough.

For me, the devil is in the detail. I can take a perfectly nice picture with my smartphone. What I can’t do though is an edit that in the same way, I would a DSLR picture on my computer. I also wouldn’t have the same control or flexibility that I have when shooting manually with my Nikon.

Aside from technology, as photographers we practice and hone our skills constantly, there’s a reason we do things a certain way and we tend to know what we’re doing. I once had a client who’d bought an expensive DSLR and asked me why it was taking rubbish pictures. I had another who asked me if I could teach them how to take and edit pictures properly so they could do it themselves. As exasperating as this can be, it gives me confidence that the people who cry out that anyone can be a photographer these days most likely have all the gear and no idea!

The evolution and subsequent decrease in the price of cameras have opened up photography to just about everyone, it’s made it far more accessible than it ever has been before. That’s a great thing, no hobby or profession should ever be exclusive due to lack of funds. While many worry that this means the ruination of photography, I disagree. Being ‘good’ just because nobody else can afford to have a go is worthless. Now, we have to try harder, keep up with the changing technology and adapt our methods. Olmos went on to say,

‘Photographers are getting destroyed by the rise of iPhones. The photographers who used to make £1,000 for a weekend taking wedding pictures are the ones facing the squeeze. Increasingly we don’t need photographers – we can do just as well ourselves.’

If someone wants to shoot a wedding for £200 because they bought a cheap DSLR and want some pocket money then the person who hires them wasn’t your client anyway. I don’t doubt that many companies, couples, events managers, will try and ‘do it themselves’ because it’s cheaper, but that’s something we just can’t fight. It just means we have to demonstrate in what we do every day why we are justified in calling ourselves photographers, rather than just being another person with access to a camera.

Much the same way that there was an outcry over eBooks heralding the death of the book, there will always be those who worry that a shift in the norm is the end of all that they know. The truth is, there is a place for both and probably always will be. We still have film photographers despite the overwhelming preference for digital, vinyl has risen in popularity again, despite easy downloads; after an initial interest and peak, things always settle down and find their place and camera phones are no different, we just have to keep doing what we do and striving to perfect our craft.

If you’re new to wedding photography, you may enjoy our Comprehensive Guide to Shooting Weddings.

Knowing what you need to shoot a wedding can be overwhelming. We’ll help you out with Wedding Photography: A Look Inside Your Gear Bag.

Discovering that there’s more to photography than a camera is everyone’s first step. Check out 5 Things a Photographer Should Learn from Arts.

Rating: 2.43 based on 7 Ratings
The following two tabs change content below.