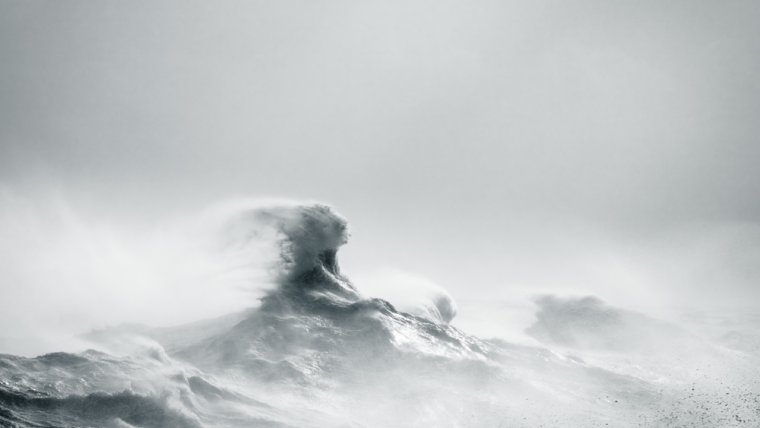 I’m a full-time professional photographer specializing in fine art coastal imagery. I live in Surrey, England now but I grew up on the South Coast, in a yachting family. For the first twelve years of my life, every weekend and all of the school holidays were spent at sea. Those years left me with a lifelong fascination for the ocean. Although I now live in a landlocked county, I go to the coast at least once a week.

I first became interested in photography during my teen years when I was given a little cartridge-film camera for Christmas, one where the case folded down to make a handle. The obsession really set in when I took my first 35mm camera on a 9-week solo backpacking trip around the world. I had just qualified as a solicitor in a big City of London firm. This job allowed me to take unpaid leave before settling into the rigors of practice. When I returned, I spent my first paycheck as a qualified solicitor on an SLR. And that was it – I was completely hooked!

2) A question we ask all photographers – What is in your kit bag?

My main camera is a Canon 5DSR. That is accompanied by the usual selection of Canon lenses, a Benro tripod, and LEE Filters. I’m proud to say that LEE Filters now support my photography and workshops. I like the flexibility of a DSLR and I’ve been using Canon for so long now that the cameras are like an extension of my hand. This means I can concentrate on creating without any distractions. While my preferred cameras have stayed the same, my preferred lens focal lengths have changed in recent years.

My Canon 16-35mm lens used to be the most often-used lens in my kit bag but now I use it the least. I like the Canon 24-70mm and even more the Canon 70-200mm, which is probably my go-to lens these days. Using telephoto lenses and longer focal lengths enable me to simplify my compositions, allowing me to think carefully about what I want to depict.

3) How crucial is post-processing to your photography?

I try to spend as little time on post-processing as I can. This is not because I have an attitude about it or think it’s more ‘pure’ to get the shot in camera but rather because I like being outside and not on my computer. So, obviously, I am going to be more creative in a place I enjoy. However, I do shoot RAW so I must process my images and I do almost all of that in Adobe Lightroom. I rarely need to go into Photoshop but if Photoshop helps me create the picture in my mind’s eye, then, of course, I will use it.

The other important thing for me is to try to leave a decent gap between taking an image and processing it. Sometimes, if I look at the pictures on my computer too soon after a shoot, I can feel disappointed. I’m sure we’ve all had that feeling at some point in time or another. A time gap between the capture and processing stages enables the emotion of the experience to subside and that results in a more considered edit.

4) Do you have a favorite image?

I find it hard to choose a favorite image but if pushed, I would probably pick Poseidon Rising. This image is one of my Sirens series, the set of images that has done most to raise my profile. Although all the photographs in this series were taken with very fast shutter speeds, they were a long time in the making. I had worked it out that the beach at Newhaven in East Sussex often had good surf. I had been going there almost every week all winter, capturing the sorts of images everyone else makes there. Essentially that of waves crashing against the lighthouse.

But I was frustrated because I felt I was making photographs similar to other people’s photographs, and I hate that. However, all those visits, while yielding no ‘keepers’, were very useful because I was working out exactly what sort of image I wanted to make there. One day, I captured a photograph of a wave, with no lighthouse and no other landmarks. Next thing I knew, an idea clicked in my head. I wanted to capture a series of waves that looked like monsters and name them after mythological maritime creatures. And so my Sirens were born.

I picked Poseidon Rising in particular because it most typifies what I was trying to achieve. A wave of attitude, named after a Greek god with plenty of attitudes, in an interesting light and unlike the images made by everyone else on that stormy day. I am so glad to see that my Sirens project has been well received. They have been winning multiple awards including Black and White Photographer of the Year and the Sunday Times Magazine’s award in Landscape Photographer of the Year. The series is being published as a fine art book, due to be released in February.

5) Are there any challenges to being a Landscape/Nature Photographer?

I think the most challenging part of being a nature/landscape photographer is that title! I do not really see myself as such, but that’s how I am often pigeonholed. Photography struggles to be considered as an art, in the UK especially, but to a certain degree everywhere. I think that is even worse with ‘landscape/nature’ photography. People expect images in that category to be records of recognizable places or creatures. With that sort of photography, there is still plenty of scope for artistry, skillful composition, beautiful light and subtle editing. I admire and enjoy photographs produced by many excellent photographers in this genre but it is not what I am trying to do.

I am less concerned with representing a place. When I go out on location, I am not trying faithfully to show the scene as it might have appeared to you if you had been standing right next to me. Instead, I want to show you the one thing in that scene that appealed to me personally. I want to convey how it felt to me to be there in that moment. Perhaps we should call it ‘interpretative photography’ rather than ‘fine art’ but it is all semantics in the end. Some might even argue that all photography is interpretative on some level and I can hardly disagree!

6) Any tips for other photographers?

One piece of advice I give to my workshop clients – find a place you love, and return there repeatedly! When we travel to far-flung places, that we may never visit again, we are likely to capture the obvious and clichéd shots. We become ‘photography tourists’ to some extent. It is difficult to avoid influence from photos we have seen, that were produced by others at that place. When we return to somewhere often, we can just relax. We can risk wasting time on experiments because we know that we will be back. I think that is when people start to find their own unique vision.

7) What does your photography future hold?

I have a lot of plans in the pipeline for 2018. There is the Sirens launch, several exhibitions, and I would like more gallery representation by the end of this year. My Workshops and Photo Tour business are continuing to grow. In fact, it is becoming hard to satisfy demand! I’m also starting to lead residential photography holidays/workshops for Ocean Capture, a leading fine art photography workshops business owned by Jonathan Chritchley.

I have a full schedule of speaking engagements and I will take on writing commissions whenever they come up, as I enjoy them. The category winners of Outdoor Photographer of the Year had been announced at the time of writing this interview. I was one of the judges for that competition this year and I’m looking forward to continuing in that role. Creatively speaking, I want to continue refining my compositions to simplify them, and seeking subjects in the smaller details. However, even if I knew I would never win another award, sell another print or run another workshop, I can honestly say that I would still be out there, in the teeth of a storm, having the best time ever and I hope to be able to do that for a very long time to come.

8) Lastly, where can we see more of your great work?