Admiring Ayia Napa from a Ship 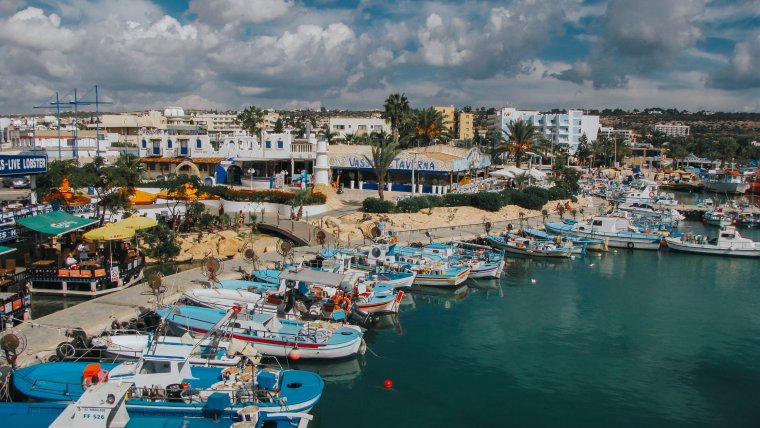 Somewhere in the Mediterranean (on an island difficult to find on a map), there is a resort town called Ayia Napa, a place perfectly positioned on the warmer side of the earth. So perfectly is it positioned, in fact, that the sun appears to be in love with it; if you were to experience the island’s endless summers and delightful ships brimming with tourists, you’d eagerly confirm my thoughts.

I had the chance to enjoy the town on an unsurprisingly warm October day six years ago. (If you’re wondering why such warmth was not surprising, know that for the locals, unclouded autumn days are a natural matter.) I was able to admire the city’s landscape from a cheerful “pirate” ship filled with delicious snacks, welcoming people, and nautical music. Though we traveled for a mere four hours, the memories and photographs have acquired a certain timelessness which proves just how incredible photography is at preserving remarkable moments. These are my Cyprus adventures.

The journey began at 11 in the morning, a busy time of day for enthusiastic travelers of all sorts. Tourists were eagerly collecting at the ship’s entrance and trying their best to catch a glimpse of the treats awaiting their arrival. The ship itself, a looming presence which towered over the surrounding boats, looked slightly out of place. It seemed that we had obtained the key to the 17th century for a few hours, a key that would lead to stunning photographs of food, people, and an era unlike our own. Aware of this, we were determined to make the most of our approaching adventure.

The ship welcomed us with silent darkness at first, leaving us wildly intrigued, while merry tunes floated in the distance. In a matter of seconds, everything became excitingly clear: comfortable seats on the ship’s deck, a couple of crow’s nests, a quarterdeck where we could take pictures with the crew, and a bar where brightly colored drinks were generously given out. The delicious snacks and drinks matched the day’s palette – an azure sky and soft, chalky clouds – the ideal situation for a photographer. Since every corner was so captivating, it wasn’t surprising to see most of the tourists taking endless snapshots with their phones.

Boats lined up neatly bid us farewell as the ship began its journey; the scene looked like it had been taken straight out of a postcard. My Canon Powershot SX10 has happily absorbed the view with an aperture of f/4.0. The camera, 10 megapixels with a 20x zoom lens, was ideal for this journey. The only disadvantage was the terrible video quality, which wasn’t much of a setback when considering the impressive zoom lens. The zoom lens would really come in handy a little later.

As friendly chatter rose and abated, the ship passed mysterious caves, peaceful fishermen, a lonely lighthouse, and delighted tourists on neighboring ships. And then, all of a sudden, the October sea lost its temper. It rocked the ship back and forth, intensely alarming the whole crew. There were many who enjoyed this unexpected turn of events and absorbed the pure unpredictability of a great, albeit short, adventure. For a brief moment in time, we were in our own infinite bubble. Though we could predict nothing, we felt everything all at once. Such an enriching feeling proved to me just how precious adventures – and capturing them – are.

My zoom lens revealed its strongest side when we reached Famagusta, a ghost town north of Ayia Napa. The disconcerting quietness of the town silenced us all for a few moments, forcing us to think back on the town’s history. Captured by the Turkish army in 1974, Famagusta has been uninhabited ever since. The townspeople, wanting to avoid the invasion, escaped the town so suddenly that they left everything as it was. To this day, the things they neglected still stand like statues in a haunted museum. A normal lens wouldn’t have been able to capture the sight since the town was far away, so I was grateful for the opportunity to catch such a fragile place frozen in history.

On the quarterdeck, tourists could take as many photos as they liked with the crew. Their pirate costumes were inspiring and further pushed us into a reality so different from our own. This otherworldly feeling resulted in creative ideas which clung to me so strongly that they’re still with me now. This feeling brought together strangers of all backgrounds. There were many, many absorbing conversations and not a single tear. I knew, at that moment, that photographers interested in photojournalism would adore a trip like this. There were so many people whose stories were worth listening to.

After many delicious meals and breathtaking sceneries, the ship returned. Everyone cheered and thanked the staff for providing us with brilliant memories we’d never forget. Surrounded by positivity and happiness, I couldn’t help but appreciate the beauty of ships and the great creative opportunities they can give to anyone, especially photographers. Portrait photographers would’ve benefited from the tourists’ reactions, the enthusiastic locals, and the vibrantly dressed pirates. Nature-loving artists would’ve adored the abundance of ever-changing views. Food photographers would’ve cherished the mouth-watering meals we were constantly given. Photographers of any kind would find something worth capturing and adding to their portfolios on this journey.

As for me, I visited the mountains after all of this busyness to find peace and quiet. Sleepy and positively overwhelmed by the adventure I had been a part of, I watched the sun paint the clouds as it did every day. It struck me that it did this without waiting for gratitude or admiration. Perhaps, I thought, I should do the same. And so I took photos of the things I loved: the sunset sky so different to the azure sea, the calm mountain birds perched on nearby branches, and a house patiently waiting to be covered in stars. While I was taking those photos, I felt another adventure slowly approaching. But that, dear reader, is a story for another day. {To be continued}