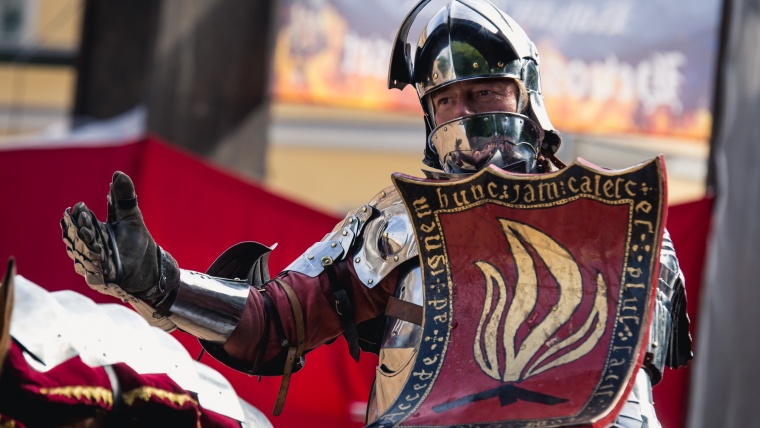 I visited the annual Turku Medieval Market and took some photos of the medieval tournament organized by Rohan Stables. I will share my experience including some photos about the awesome performers with authentic looking gear as well as some tips and lessons learned about event photography.

Rohan Stables are organizing tournament spectacles where knights in shining armors ride with armored horses and compete in medieval sports, including jousting. This was a unique opportunity to take same extraordinary photos. Unfortunately, the circumstances were not the best for photography. The sun was shining brightly and the stands for an audience where facing each other on the quite close range. There were also urban buildings, vans and other background distractions in almost every direction. I had not asked for a press pass and was sitting in the middle of the audience like the rest. I did not have a possibility to freely choose a good photography spot.

Soon I was watching in awe as knights arrived and were riding with horses dressed in medieval outfits. After the opening ceremonies and preparations, they took the lances from squires and galloped in full speed towards each other. I felt like a young boy, heart beating in joy, and I had a hard time trying to have enough patience to sit nicely on the bench. My camera was ready for capturing the action with shutter speed forced to 1/1600 sec. In a blink of an eye, the knights passed each other breaking their lances on the shield of the opponent. I checked the shot from the camera, and it was immediately obvious that the conditions were not good for taking good shots of the moment when the knights hit each other. As can be seen from the photo below, the timing and exposure are ok, but the action is getting lost in the sea of bright faces of the audience at the opposing side of the field. This angle might produce good art photos if the background of the image is manipulated away with Photoshop, but that would not be a valid documentary photo anymore. I had no possibility to change my position and 70mm focal length needed for this shot was not producing enough background blur even with an almost wide open aperture of f/3.2.

Some tips for medieval event photography

So, how to handle the situation and get at least some nice photos of the event? One trick was to concentrate on details. The performance was so close that with 70-200mm lens I was able to get some good close up shots even while sitting in the audience. The photo of the horse head was taken in the moment when the rider was exactly sideways towards me and the red sheet that was covering the entrance to the field was producing an even background.

Another trick is to concentrate on taking close up photos of facial expressions. The photo above is showing a female knight pondering while choosing a muse from the audience. The urban background is not the best but works quite ok with this amount of bokeh. The intense stare of the knight and the composition of the photo with diagonal lines bring depth into this photo. Below is a shot of the squire approaching the chosen muse with a sword. Luckily I was sitting quite close of the chosen muse that I was able to capture this charming smile. Close ups of smiley faces tend to work.

One way of handling the tricky sea of faces of the opposing audience was to take photos when the knights and action were at the ends of the field. In that direction, the audience was not messing the background. Combining that direction with tight close-ups produced some good photos like can be seen in some of the example photos included.

One crucial aspect of event photography is capturing the right moment; a moment which is self-explanatory, unique and contains something that thrills the viewer. The photo below is taken just before the squire covering herself with a shield is hit by the lance. The lines in the photo are guiding eye towards the furious face of the knight, which is positioned close the golden selection. The frightened face of the bystander on the back is enhancing the excitement of the situation. The bend knees of the unlucky squire and her forward lean are anticipating the impact. The photo is taken just before the actual hit, which is tickling the mind of the viewer and increasing the suspension. What happens? How is this going to end? I had also the photo of the actual hit, but it is much plainer as there is not this amount of excitement and suspension. In many cases, the right moment for a photo is actually the split second before the actual moment of the action itself.

Here was a brief report of my visit to the medieval tournament. I hope you got some inspiration and tips for event photography. Even though sometimes it is good to enjoy a show without a camera and not through the camera lens, taking a photography challenge can give some extra excitement for watching a show.

I am a freelance photographer living near the Helsinki metropolitan area in Finland. I have a day job in the IT industry and my free time is spread between being a freelance photographer, tango teacher and dad. I have passion on all artistic things and creativity; be it dancing, taking photographs or playing music. I have background in martial arts from where I have learned to aim for perfection. My photographic journey is a constant hunt for an even better photo, thriving to capture the beauty of the moment.