Photographing in a Crowded Area – Removing People in Adobe Photoshop

When it comes to adventurous travelling, photography is definitely one of the things you do in order to keep those precious memories with you. Whether you are photographing in the beach or in the streets of your favorite city, there will always be people who appear in the photos yet you do not want them to feature in the final photos that you preserve. As such, removing such people is always important and this can be done easily using Adobe Photoshop. 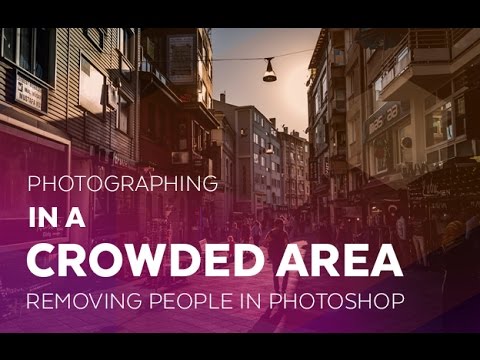 Removing people and objects can be essential especially if your photos were taken in a crowded place where you intend to capture some significant events or highlights yet you do not have the chance to control the crowds to stop moving so you can shoot. As such, this tutorial will guide you on how you can instantly removing moving objects or people from your photos thus leaving you with photos which are devoid of any unwanted elements.

How to remove people or moving objects using Adobe Photoshop

First, you will need to have a number of images, 12-14 but you can have more if you want to (we’ve used 18 in our tutorial video). The images used in our video were in JPEG and we will scroll them down to see how the process works. As you can see in our video, the images here were taken in a lighthouse and there are many moving people appearing in the different photographs. These are the ones we will be removing carefully to ensure that the images appear untouched and as original as possible. You do not want to have your photos looking funny and appearing to have been obviously edited.

Start by going to Photoshop and open the file menu and go to scripts and then to statistics. Make sure that your statistic mode is in Medium before choosing “use files” and then browse. This will give you the chance to choose the files you intend to use to remove people or objects using Adobe Photoshop. Once you have your files ready, load them into Photoshop.

In case your photos were taken in handheld, you can have Photoshop to automatically try and align them. In our video, we won’t do that since the photos in our image were taken in tripod. Once you load the photos, Photoshop will open and analyze all the images and find any moving people or objects in them. Adobe Photoshop will then automatically take the moving objects out and replacing those sections with other parts of a different photo where the moving objects do not appear.

Depending with the number of images that you have and how fast the system you are using is, the process could take up to 10 minutes and therefore you will need to wait and be patient. After the process is over, you will have the final photo which might have a few people or images which didn’t move throughout your shooting process. As can be seen in our photo in the video, we were left with three people who were not moving throughout the shooting process. Any unmoving objects that you did not intend to remain in the final photo could be a problem but this doesn’t have to trouble you since you can use the cloning tool provided by Photoshop.

It is good to know that Photoshop can mess things up sometime. You should therefore be having an image somewhere which should be having the images you want to remove cleared. Just drag that image on the top of the final photo and align then properly such that they will be on top of each other. Once you do this, just do a “Layer Mask” and go ahead and try to pain the underlying layer in. in case you have any few images still remaining, you can do a little bit of clean-up until your photo is clear and without people. This is always better that trying to clone a whole bunch of people using Adobe Photoshop. Once you have removed all the people from the image, go to the “Brush Panel” or “Options Bar” and select “Clone Stamp Tool > Brush Preset Picker > Medium feathered Brush”. This will allow you to clear any flaws remaining on the photo thus leaving you with a clear images whose edits are not easily detectable.

(If you are using Mac, press the ALT Key down and then click on a clear section next to the flaw in the photo and then release. Click on the flaw until you are able to obtain the desired results. You should make sure that the clone has blended seamlessly with your background and avoid being carried away when using the cloning tool since this can leave your images looking blurred.

This process is always easier and faster especially if you are in a place where you want to photograph let’s say a monument but there are a lot of people who will end up appearing in your photos. You can also use it to remove a few people from the image and remain with those you want to have in the final print of your photo. This is good especially if you are taking a group or family photo in a zoo or in front of a special feature but with uncontrolled traffic of people. It will help get rid of all moving objects and people leaving you with those who need to be in your final image.

I am a Real Estate and Landscape photography as well as a Graphic Designer based in North Carolina, USA. My passion for photography started with taking photos with a point-and-shoot and now I own a successful photography business. My goal is to help others learn the art of photography, develop their creative side and just have fun.