Nikon Mirrorless – What does the future hold? 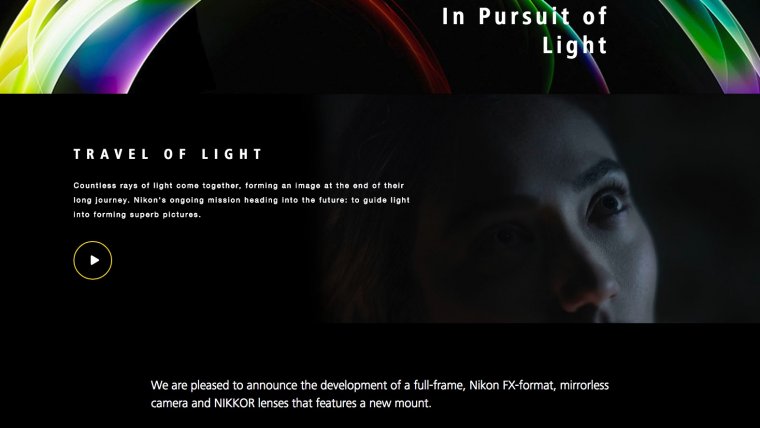 Nikon Mirrorless – What does the future hold? www.sleeklens.com

Nikon Mirrorless? Nikon has announced that they are stepping into the world of Full Frame Mirrorless cameras. What, when, where and why? Questions that everybody are asking.

This week Nikon finally broke the news to the world that they are working on a new mirrorless camera. Although this announcement is not unexpected, it certainly has got people talking. The wider photography community is asking questions about it. What will it look like? When will it launch? Where will Nikon launch it? And why has it taken Nikon so long?

All valid questions. We will dive into those questions shortly but first, you might want to check out the Nikon Press Release for yourself if you have not yet seen it.

Currently, this question is completely open for debate. Nikon has not released any actual pictures of the new camera yet. All we have to go on is the digital render that is visible in the teaser video that they released. I have included some screen-grabs (where I have increased the brightness) from that video throughout this article. We will have to wait until Nikon provides images from an actual prototype before being able to visualize what it might look like. However, while we wait for that, we can certainly have fun surmising as to its look. At least based on what see on the digital render.

Firstly, the screen on the digital render looks nice and big. As Live View and the LCD used more and more by Landscape Photographers and Filmmakers, this will be great news for them. Product Photographers might like a bigger screen too. However, a bigger display will mean less real estate on the camera body for buttons. And while some photographers might have the time to venture into the camera menu in order to get to needed features, sports photographers certainly won’t.  It is hard to know at this stage whether it will have a fully articulated screen like the Canon 6D MK2 or will it have a tilting screen like the Nikon D750 and the Sony a7 series cameras.

The digital render also shows an EVF (electronic viewfinder) of some sort.  This will certainly divide opinions. A lot of DSLR users still don’t like EVFs. But seeing as this will be a mirrorless camera you can be sure that it will not come with an optical viewfinder. And so the only choices will be to include an EVF or not. And I personally think it would be better to have a viewfinder than have none.

One big drawback of the EVF though is the delay and lag. There is an annoying delay that is noticeable on both the EVF and the LCD on my Sony a7r when shooting in lower light and at slower shutter speeds. I would strongly hope that Nikon does better in this regard!

There is not a lot of detail on the digital render as it is mostly in shadow/blackness. This is purely intentional on Nikon’s part. Either they don’t want us to know what will be the physical features on the Nikon Mirrorless camera or they don’t yet know themselves. I think it is a combination of both of those reasons!

How many buttons will be present on the Nikon Mirrorless camera is also completely open to conjecture at this moment in time. The digital render shows very little. The Fuji cameras have loads of buttons. Which a lot of Pro DSLR shooters like to see. More buttons, means more customization, less menu navigation and quicker and easier to operate. I for one would love to see more buttons than fewer buttons. But only time will tell whether it will be the former or the latter.

I think a size in between the Sony a7iii and the Nikon D850 would be nice. I always loved the size of the Canon 7D with the battery grip and I always found the size of the Canon 6D to be slightly too small. The Nikon D850 is probably a little on the large side and is definitely heavy. On the other hand, the original Sony a7r is too small and light. And while the new Sony a7iii body is certainly shaped better, it is still very light and probably looses out on the ergonomics battle to its bigger DSLR counterparts.

Finally, there is the mount. The size of the mount depicted within the digital render is massive!

The mount looks really large in relation to the overall body size. Who knows if this will remain the case with the actual Nikon Mirrorless prototype. Nikon has stated in their press release though that the body will feature a new mount. And they also stated the Nikon F mount lenses will be compatible via an adapter.  Canon also provides a mount adapter which enables users to mount Canon EF mount lenses onto the EF-M mount that is present on their APS-C mirrorless bodies, such as the Canon EOS M50. That adapter actually works well. I can envision Canon also doing the same when they get around to releasing their Full Frame Mirrorless body as it will probably feature a whole new mount as well.

When and Where will the Nikon Mirrorless launch?

This question is also open for debate but not as much as the look/features of the Nikon Mirrorless body. I think it is very possible and probable that Nikon will launch the camera later in 2018 at Photokina. I am hedging my bets that Nikon will have a working prototype to demonstrate at Photokina in September. But how much “final features” are actually present in that prototype will remain to be seen.

I could be wrong (wouldn’t be the first time!) but I doubt Nikon will actually be making their new full-frame mirrorless available for retail at Photokina. Instead, I think they will put on a big show and try to drum up a lot of hype and interest in their new offering. Similar to what Fuji did for the announcement of their medium format offering. I would be very surprised if people will actually be able to get their hands on this new Nikon Mirrorless offering in time for their Christmas stockings!

Why has it taken so long?

This is the age-old question that may Nikon and Canon users have been asking for a long time. I am a Canon user and one that is rather fond of the Canon system. It is my hope that both Canon and Nikon have been taking their time with their full frame mirrorless offerings for the purpose of seeing what works and what doesn’t (thanks to Sony!).

I love the image quality that Sony full frame mirrorless sensors provide. And I love some of the things that Sony are doing at a software level within their a7 series. I do still prefer the ergonomics and feel of both the Nikon and Canon DSLRs. Call me old-fashioned, but I just like big camera bodies and feel that they are more robust. I have more trust in that they can take a beating and survive. I currently cannot say the same about the Sony a7 bodies which are so small and light.

Both Nikon and Canon are late to the Full Frame mirrorless game. They have been the photography giants for years. But in recent years, Sony seems to be standing taller than them. If not in camera sales alone, certainly in the fanfare and admiration stakes. Canon is still number one in the Full Frame camera sales, with Sony now coming in second place. No doubt that Canon has been hurting as a result of the Sony a7 series, But I feel that Nikon has been hurting more. Canon still has a huge share in the full frame market, specifically in the sports, wildlife and speed arenas. And I don’t think that will change anytime soon. However, a larger portion of Nikon’s full-frame market has been Landscape photographers over a last number of years. Mainly thanks in part of the likes of the Nikon D750 and the Nikon D8xx series. And a lot of these users have been jumping ship to the Sony a7 series.

Like many other users, I am just hoping it is not a case of “too little, too late” for the pending Nikon Mirrorless.