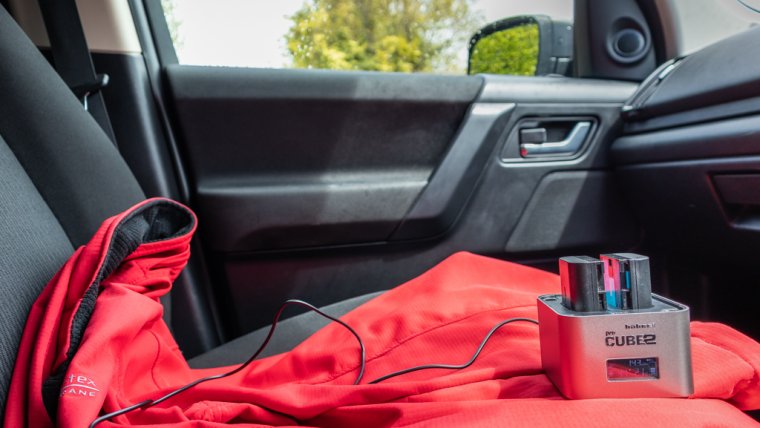 As a Freelance Landscape Photographer, I regularly venture outside during the early hours of the morning in case of those lovely sunrise colors. And as I am often away on location for the day,  I am rarely near a power source. This can be quite problematic for me. I have several cameras each with several spare batteries that I constantly need power in. Long exposures, time-lapse, recording video and using the Live View functions on my cameras can drain the batteries rather quickly. Especially so during the colder months in winter.  Because of this, before heading away on location, I am always trying to ensure that I have charged all of my batteries sufficiently. As there is nothing worse than arriving on location only to discover that you have flat or low batteries! So to set the scene correctly in your mind’s eye, when I am heading out shooting it is normally dark, way too early, I have not had enough sleep and so I often find myself tripping over the complex array of battery chargers that lay on my office floor. Thankfully the Hahnel PROCUBE2 resolves this problem very nicely for me.

The Hahnel PROCUBE2 caters for charging two batteries while at home plus it also comes with car charging abilities. The team at Hahnel were nice enough to provide a 12v charger within the PROCUBE2 box. Now, I know what you are thinking. What is so great about a car charger you ask? Well, a car charger in and of itself is nothing to write home about. However, this lovely unit allows for the charging of two batteries at a time. And not just that. The Hahnel PROCUBE2 also comes with additional charging trays for charging different battery models for a given camera vendor.

For example, the Hahnel PROCUBE2 for Canon provides trays for the main LP-E6 battery model as well as trays for the LP-E8 and LP-E17 models. As an added bonus, it also has a tray for charging four Ni-MH AA batteries and even a USB port for charging your phone! The Canon model has proved very useful for me as I have several LP-E6 and LP-E17 batteries. The LP-E6 battery model is used in most of the Canon Full Frame and even Semi-Pro/Higher-End Enthusiast camera models, such as the Canon 6D, 5DII, 5DIII, 7D, 7DII, etc.. The LP-E17 is used in the Canon M6, M3, M5 mirrorless bodies.

The Different Flavors Of The Hahnel PROCUBE2

Like ice cream, the Hahnel PROCUBE2 comes in a variety of different flavors. There are five different models, each with its own unique color. The Canon model is a Light Grey and the Nikon version is a Dark Grey. The Sony model is Orange. The Olympus is Brown and the Fujifilm/Panasonic version sports a Blue color scheme.

The following list outlines which batteries are supported by each version:

Seeing as I just recently got a second hand Sony A7, with eats quickly through the 6 batteries that I have for it, I think the Sony version will be added to my arsenal in the not too distant future.

My First Impressions Of The Hahnel PROCUBE2

Firstly, the packaging is great. I think it really stands out. The unit is also so small and light. It really takes up no real estate within my office, my Land Rover or in my camera bag. The unit literately fits in the palm of my hand!

As mentioned earlier, I opted for the Canon version first and was impressed that it was able to charge both of my main Canon batteries. The USB and AA charging capabilities proved to be a nice added bonus. I have several rechargeable AA batteries in my bag at all times on account of the various head torches and my wireless remote shutter systems. Walking around in the dark when out shooting stars and the Milky Way can really drain the AA batteries. So it is nice to be able to charge them up in my Land Rover while I am getting warm!

The USB charging is also a really neat feature. Phone batteries seem to die rather quickly on account of all of the “smartphone” features. WiFi, GPS, Mobile Data, Bluetooth, Facebook, Instagram, Large Screen, etc… These phones are not too smart if you ask me, considering all those features are useless if the phone battery dies! Remember the good old days of the Nokia 3210?

How The Hahnel PROCUBE2 Helps My Photography Business

Delays can occur when waiting around for several batteries to charge. Instead of waiting for all of my batteries to fully charge, the PROCUBE2 allows me to charge the batteries while I drive between shoots and locations. I have four 12v charging points in my commercial Land Rover and so I can have four PROCUBE2 units running at the same time. This has been an absolute game changer for me. If driving on the road for even 60 minutes, the batteries will be charged upon arrival at the destination. That is just pure awesome sauce!

The ability to charge batteries to go while driving around is really fantastic. I am normally fairly diligent with ensuring that my batteries are charged before and after each shoot. However, if I happen to forget, I know that the PROCUBE2 will solve that problem for me.  It is much better to be out shooting, rather than waiting around indoors for batteries to charge!

You can find out additional information on this product over on the Hahnel site.