A Guide to Night Photography Mastery Without a Tripod 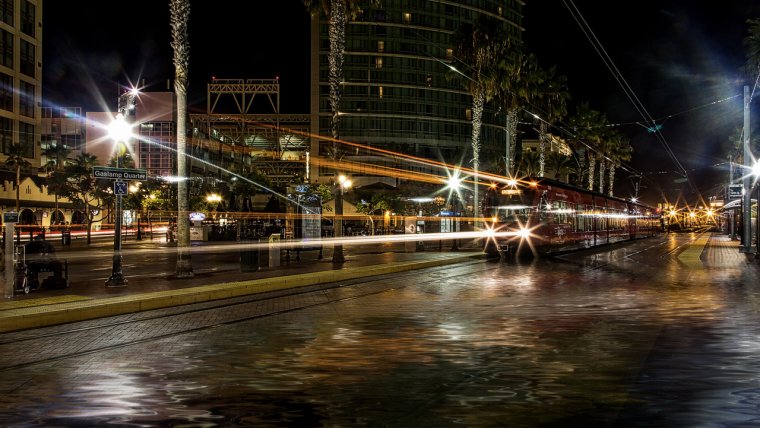 A Guide to Night Photography Mastery Without a Tripod www.sleeklens.com

To start off I want to mention that night photography either requires a tripod or at least would it be smart to bring one. Meaning, if you are doing a shoot for a client, trying to produce top quality photos for your portfolio or similar, you would want to bring a tripod in most cases.
With that said, many times you might not have the time or opportunity to bring a tripod, or maybe you are on a more casual shoot, but still, want to get the best possible results.
In this guide, you will learn which kind of gear and features you want for general purpose night photography. You will also learn a couple of techniques and the associated settings to get the best possible pictures when it is dark outside.

Photographing in the darkness

of the night or a late evening could be for an almost infinite amount of different reasons, so recommending specific gear can be difficult.
Generally, the challenge the dark provides us photographers with is the low light, which often results in both high noise and blurry photos (due to slow shutter speeds), and also can prove difficult for the autofocus system in the camera.

Therefore we want our gear to handle noise well and have some sort of image stabilization. You could also opt for better autofocus performance, but generally, it would not be worth keeping that in mind, since you can just use manual focus. But of course, if you need good autofocus performance because you like shooting for an example sports, then that’s another situation.

In terms of DSLR camera bodies that handles high ISO levels, you could look at something like Nikon D5, Sony a7S II, Canon 5D Mark IV, Nikon D5600 and many others. Generally, noise performance is very good in newer cameras so you shouldn’t worry too much about.

The single most important feature you want to look for when buying gear for night photography is image stabilization. It may be called vibration control or some other variant depending on the manufacturer, but the concept is the same.

Turn on your Image Stabiliser

If you are a Canon or Nikon user, then you want to look for lenses with image stabilization. Canon lenses are marked with “IS”, Nikon with “VR”, and Sony usually refers to it as “SS”.

If you want to use extremely slow shutter speeds, try looking for a wide angle lens with image stabilization. As you might know, you are able to use slower shutter speeds on shorter lenses without getting noticeable handshake. This way you might get sharp images even at something like a quarter or half a second with practice and multiple shots.

Use a wide aperture

usually use a small aperture such as f/16 to get everything sharp and clear, but in terms of low light conditions using a small aperture won’t work, because of the smaller the aperture, the more light you will lose. So, the idea behind using a wider aperture at night is that more light will fall on the camera’s sensor, which means that you will be able to select a low ISO number and to use a faster shutter-speed.

Making sure that you stand in a stable way and use your arms to support the camera can mean big differences when the light is sparse. In short, what you want to do is spread your legs a little further apart than you normally would. Now if this was a wrestling class I’d tell you to bend the knees too, but since this creates another mobile joint I would advise against doing so when photographing.

If you want to take it a step further, try to look for something stable to lean against like a tree or a wall to increase your stability even more. If you aren’t too concerned with your clothes or how you look, you can also try laying down which helps tremendously, but obviously changes your composition too.  Note that could be for the better.

When doing so I would recommend experimenting with different very slow shutter speeds, since you often get surprised with how slow they can get, without introducing shake into the final image. Remember to zoom in on the back of the camera to make sure there is no shake since it often is hard to see on the small screen on the camera, but very visible on a bigger screen.

Another tip is to set the camera to continually shoot and take a series of images, which increases the chance of getting one completely sharp image.

Often times, especially if you are in a city, there is a lot of opportunities to lay your camera on a flat and stable surface. It could be a bench, a wall or just whatever is available to you. You can then position your jacket, bag, cleaning cloth or something similar to the camera to be able to point it in the direction you want. This might compromise your composition slightly, but in turn, you are now able to use a slow shutter speed as if your camera was on a tripod. Furthermore, if your camera supports the live view function, you should turn it on. It will help you to get more control over focus because you can easily zoom in to test your image sharpness.

Use a high ISO

Normally, keeping your ISO low always help to increase the clarity and sharpness of your image, because of the higher the ISO the more grain and noise you will have in your picture.
But if you have really bad lighting conditions and you are not able to use a fast shutter speed, try to set your cameras ISO higher than you normally would. If you use a higher ISO setting you will be able to increase your shutter speed and therefore your shot will gain more sharpness. If you shoot in automatic mode I would suggest setting the maximum ISO sensitivity to 1600. Nowadays most DSLRs are able to provide good quality images at ISOs up to 1600. It’s kind of a balancing act photographers are doing nowadays, because on the one hand they want to keep their ISO as low as possible for sharp & high-quality images and on the other hand they also need a fast shutter speed to receive sharp images.

Create a tripod with your body

You can create a makeshift tripod with your body if you position your elbow on your knee while you are kneeling. Another option would be to lie on your stomach, just position your elbows on the ground and use your arms as a tripod to avoid any movement.

I really hope you have found the tips and ideas in this article useful!
Thanks for reading & see you next time!