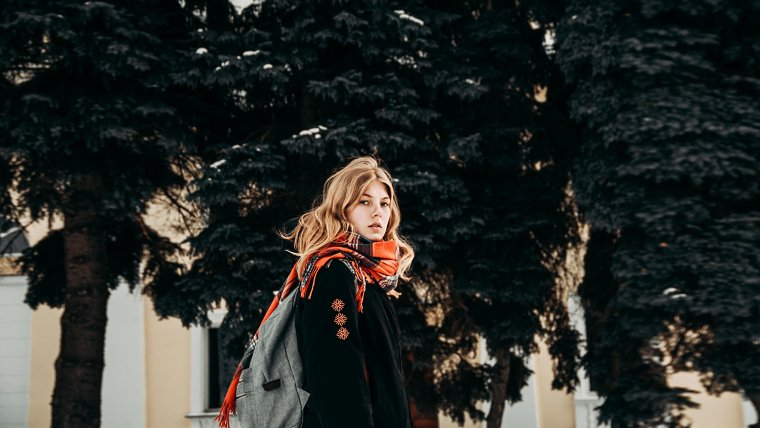 How often have you heard someone ask you to make them slimmer in the post? Everyone wants to look their best in a photo and they think the only way to do that is through make-up or post-production work. The most common phrase we hear as a photographer is probably something along the lines of, “You can fix that in post yeah?” While we have many tools such as Photoshop that can aid us in making them look their best, there are lot of decisions that we can make during a photo shoot that really have the greatest impact. Three things that we have to understand to make our subjects look their best is understanding shooting angle, compression, and lighting.

Lower angles will significantly make your subject seem more powerful and in control. I feel like the effect of a lower angle on a models face has a direct relationship with your shooting distance. Meaning, as I start to back up, the negative effects on the face start to decrease proportionally.

Even though lower angles have a bad stigma attached to it I like to use lower angles quite often. If I am shooting someone who is worthy of a lot of respect such as a CEO or an award winner, I will use a lower angle. A lower angle conveys power.

On the flip side, shooting with a higher angle will have the opposite effect. It will make the model look slimmer which is often preferred. At the same time though, this can make the model look inferior and weak. Even though many people prefer this, as a photographer you have to also understand how it also affects the mood of the photo. Often times this works in favor of both slimming down your model and making them look fragile. Some people prefer this.

One way to achieve a slimmer face in a model without getting an inferior vibe is to first have them sit down or lean on something as in the above photo. Shoot slightly from a higher angle and have them lean forward while keeping their eyes fixed forward. This will stretch out their neck slightly and exaggerate their cheekbones. Many people, due to the fact that they want to look as thin as possible, will exaggerate your instructions so be cautious. If overdone, it can look unnatural and awkward.

The next big factor is what focal lens you use and the distance between you and your subject. This determines the “compression” which is the perceived distance from the foreground and the background.  Believe it or not, this is probably just as important as the angle you use. Many people when they first start off love the huge telephoto lenses because they look cool and really exaggerate the blur of the background due to you having to stand farther back. While these things can be used in these ways, what effect does it have on your models face? The model is the main subject and should be the most important thing in your photo.

Most photographers like to find a medium somewhere around 80mm when taking portraits. It has a good mixture of compression and more accurately portrays the shape of their models face. Mess around with various focal lengths and learn how to properly use compression in your favor like Dan Vojtech did in the below experiment (used with permission).

Lighting is one of the biggest factors in shaping the mood and feel of your photograph. It also has a huge impact on how your model looks physically. Shadows and the intensity/harshness of light can literally make all the difference in your model’s appearance. As a general rule of thumb, soft light which produces soft shadows will always be better on someone’s face. It will smoothen out wrinkles and blemishes.

It’s not to say that harsher light, which produces hard shadows, can’t be used but you have to know when and where you can get away with it. It’s quite popular to use harsh lighting in higher-end fashion shoots, but it usually always involves more extensive editing. These are general rules though and like all rules of photography, can and should be broken. Take this advice and use it as you will.

Hopefully, you come away from this with more knowledge on the use of angles, compression, and lighting. Use these three methods as tools in your tool belt to help make your ideas/visions a reality!

Rating: 4.75 based on 4 Ratings
The following two tabs change content below.